Granted the most recent data ( Oct 2013) shows the key indicator still falling, we are still waiting for the January 2014 numbers. They should be available soon and then we might see whether or not Velocity of Money ( M2) is picking up as of yet. 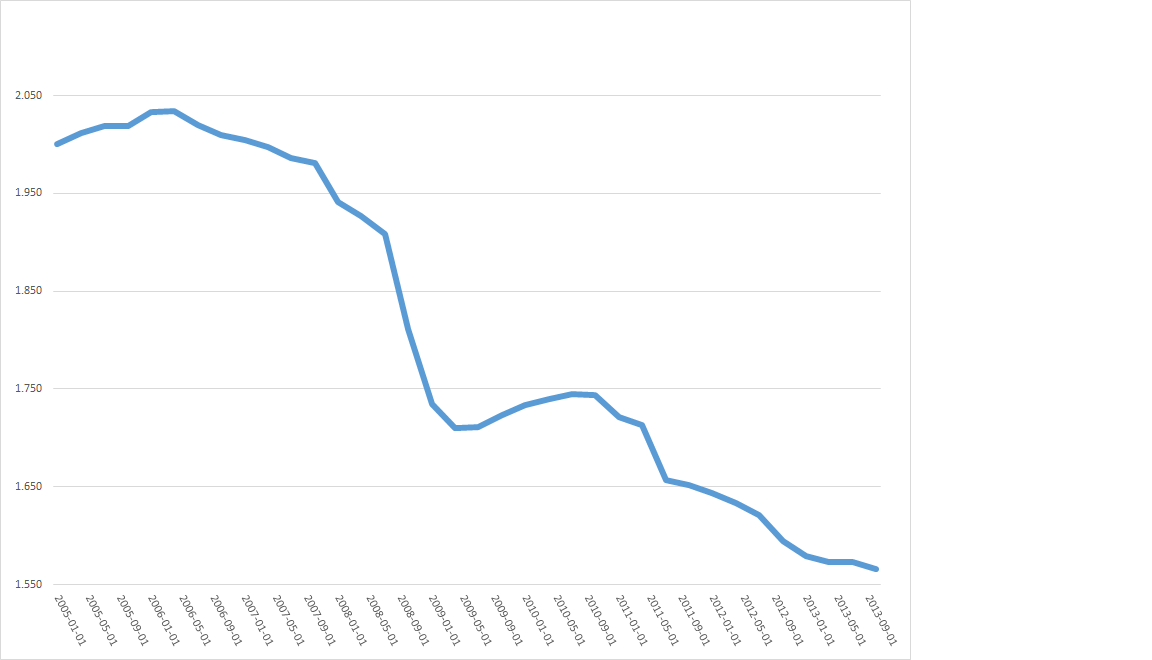 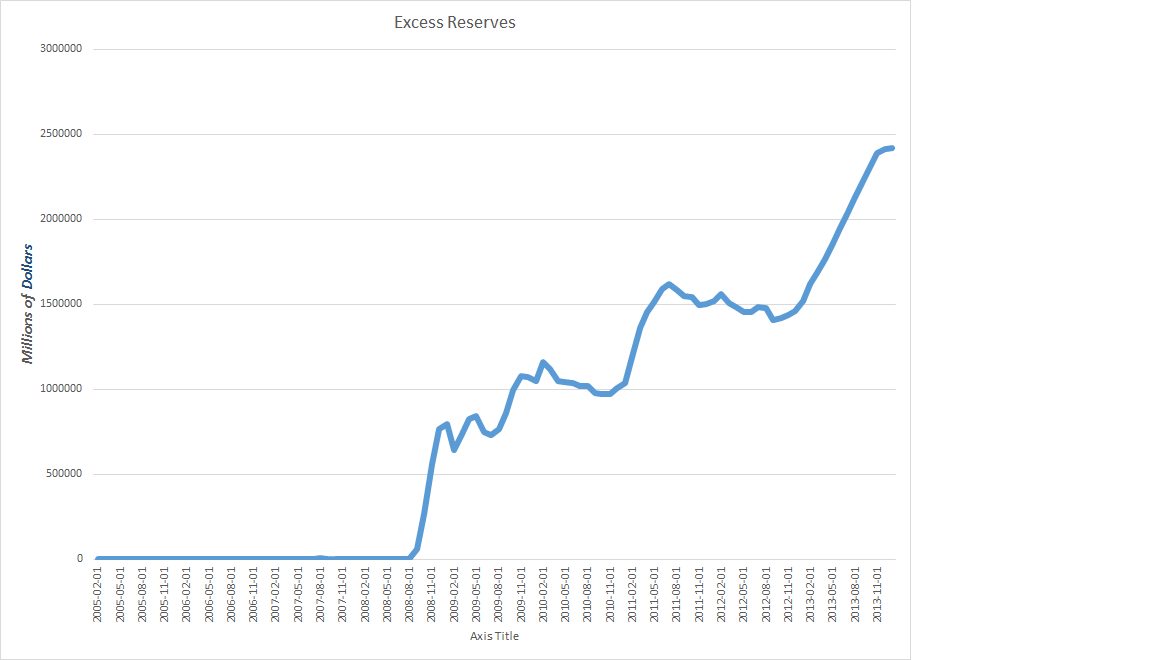 One more chart - this one details Total Reserve Balances. Here is what the note on the one of the Fed's websites states:

This item includes balances at the Federal Reserve of all depository institutions that are used to satisfy reserve requirements and balances held in excess of balance requirements. It excludes reserves held in the form of cash in bank vaults, and excludes service-related deposits 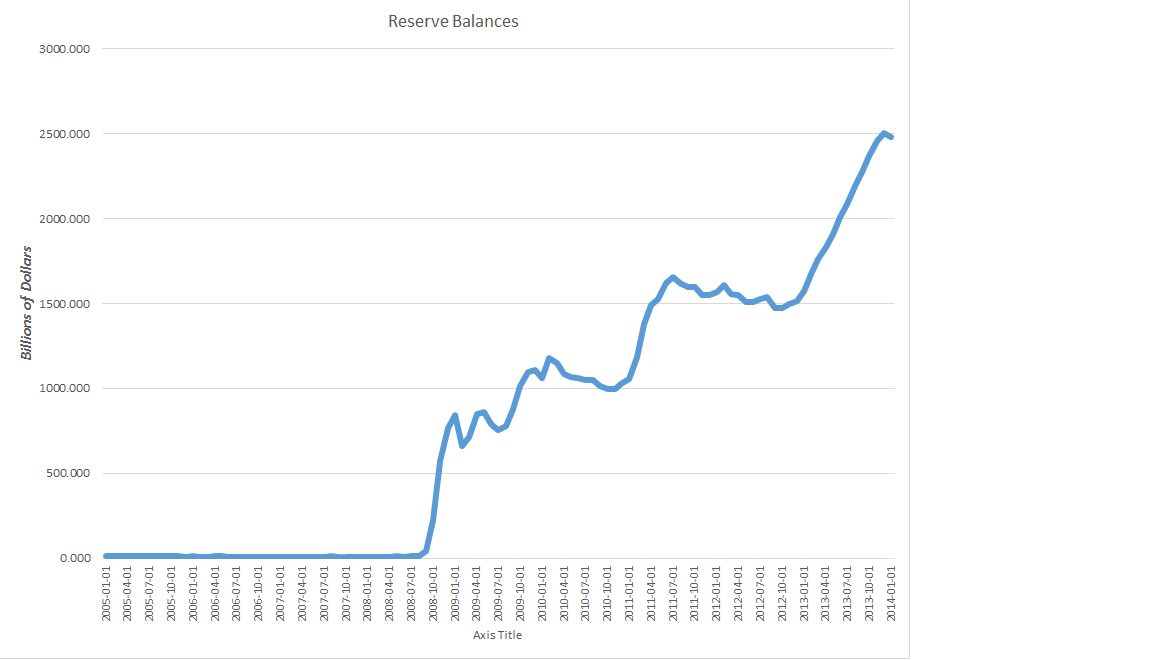 Here is the same data except updated on a weekly basis instead of the monthly update as listed above. 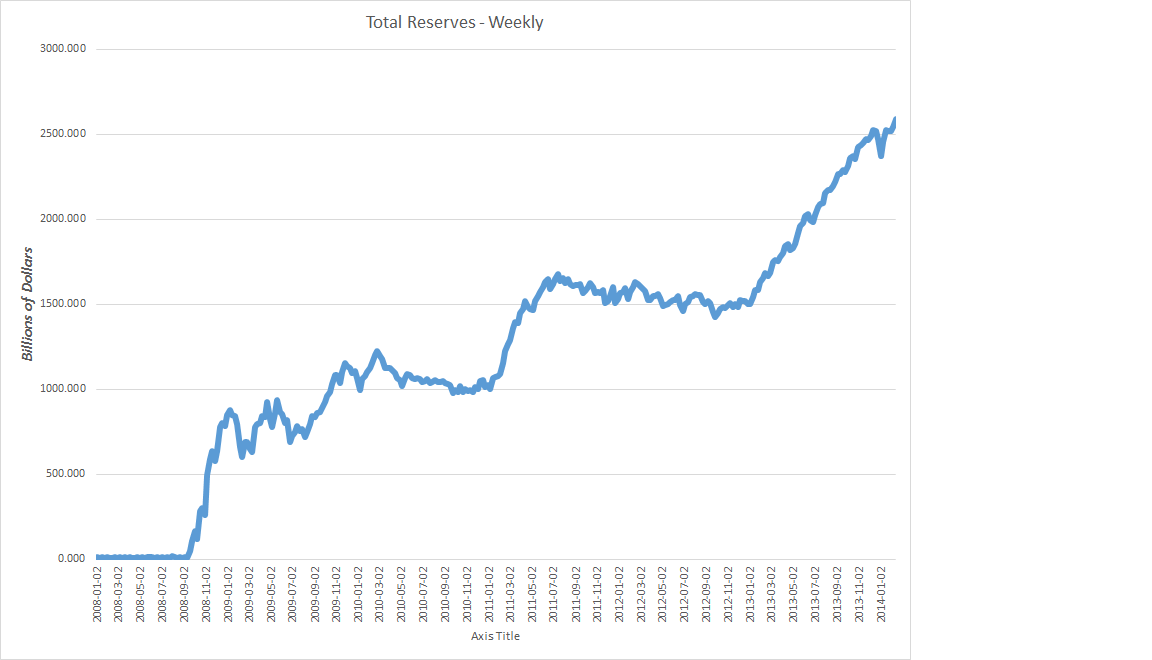 Here is what I continue to take away from these data sets. First, Velocity of Money still continues to fall although the data only covers through October of 2013. What might have happened over the last three months since then is unclear but my guess is, with the incredibly frigid winter and massive snow storms, consumer spending would certainly have been impacted. Thus I see no reason for the downward projectory of the Velocity graph to change.

Secondly, and this is the biggie in my mind - note that huge spike in both Excess Reserves and in Total Reserves that has occurred since the beginning of QE in 2008.

There were very few if any who believed that when the Fed first began their grand experiment in QE that it would not adversely impact the Dollar and by consequence positively impact gold, silver and the rest of the commodity complex. Initially it certainly did. However, what we began to notice was that for all this liquidity being created by the Fed, it was not having an inflationary impact as expected. If anything, the only thing seemingly moving higher after the first few years of this QE was the stock market.

Job growth remains abysmal, wages remain stagnant, labor participation rate continues a multi-decade lows, the ratio of total jobs compared to total population is going nowhere, etc,. In short, the economy has stopped worsening, housing sales have picked up somewhat, construction has increased somewhat but as far as strong, rapid growth, forget it. It simply has not happened, even with the enormous sums of money have been conjured out of thin air by the Fed with this Quantitative Easing policy.

Why is that? Well for one reason, based on the above charts, the "money" being created by this bond buying program continues to pile up as excess reserves in the Fed's account. The banks are not lending it into the economy at nearly the same rate that it is being created by the Fed.

Granted, when one looks at those last few charts, it is terrifying to think about what a tsunami that wall of money would unleash in the economy if it were released rapidly into the economy at large in the form of a ramp up in bank lending; however, the fact remains that taking on huge sums of new debt does not seem to be the general order of the day.

If anything, banks are probably more than content to park excess reserves there at the Fed and draw interest on them ( completely risk free) rather than risk lending those sums of monies out and risking some defaults.

The problem in the US economy, in my humble view, is not one of a stingy Fed, it is rather a regulatory and structural environment created by the current administration which continues to stifle business expansion and thus job hiring. One need only look at the runamok EPA and its war on the energy sector, the incredible boondoggle inaptly named the Affordable Care Act ( which is anything BUT that) and the refusal to open more federal lands to oil and gas exploration, a sector which is one of the few creating high-paying and solid jobs.

In short, there is only so much that the Fed can go through monetary policy.

How this impacts gold and the rest of the commodity sector should be considered by those with a bit of a more intermediate term view of things. Given the continued drop in Velocity of MOney and the continued surge in excess reserves, it is unclear to me how inflationary pressures are going to be unleashed into the broader economy as long as those reserves remain parked at the Fed.

Maybe the Fed will next resort of forcing banks to pay it for the "privilege" of holding excess reserves there. In effect, that would amount to a clear effort to force the banks to lend out the money into the economy. Given the increasing lawlessness that marks our nation, and the complete disregards of any Constitutional restraints, who knows what the Fed might do.

I would continue to keep a very close eye on the plight of the US Dollar. If the Fed does anything that might be construed as being negative for the Dollar, gold will move higher. If the Fed however comes out clearly not so much in favor of generating inflation but rather in providing what might be better termed, price stability, then I could easily envision a Dollar that is supported with a corresponding negative impact across the commodity sector in general.

This would not negate the specific supply/demand factors for individual commodity markets but what it would do is remove some incentive for the one-sided, lop-sided "buy everything tangible in sight" mentality that hedge funds are notorious for if they sense a concerted effort to weaken the Dollar.