Please see the notes written on the chart.

One thing I want to point out is the open interest numbers. They are basically staying flat which is being reflected in the inability of gold to clear the $1365 level with any sort of conviction. It tells me that specs are not convinced that gold is a buy right now. We need to see that change, which will be reflected by a strong build in the open interest, if this market is going to power higher any time soon. Remember, speculators drive markets and if there are not enough of them in the driver's seat, markets will languish.

There still appears to be decent demand coming in on the lows which is friendly and his holding price together, but we need more fund money flows coming in.

Same thing is going on in silver to a certain extent. It made it to $30 where I thought it would catch the attention of the momentum funds but it appears to be encountering some doubters at that level. I find that rather strange especially given the backwardation board structure.

The weekly silver chart looks good but you can detect that stubborn resistance at the $30 level. 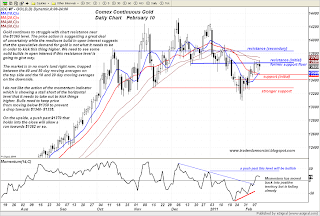 I have been fielding a few emails asking me what is going on with the crude contracts and the wide discrepancy between Brent and WTI.

Here is a spread chart indicating the extent to which this spread has blown out in favor of Brent. 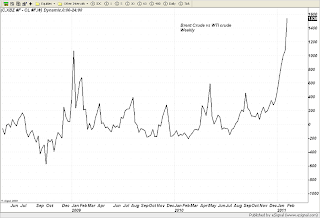 It is evident that crude traders are working the one off against the other.
I think it is important to keep in mind for those who might be unfamiliar with these markets that WTI has a delivery point for the contract in Cushing, Oklahoma.
The latest data that I have shows 345.1 million barrels of crude there at Cushing, compared to 331.4 million at the same time last year or about 4% more supply. There has been a steady build in those supplies since early January of this year. The numbers therefore for WTI are not particularly bullish from a fundamental standpoint.
However crude has not traded purely on its fundamentals for a long time now as it too, like most commodities, has a speculative element going for it. As such, it is heavily influenced by money flows from the hedge fund community.
I am of the opinion that WTI is being used as the short leg of a spread involving funds playing off the Egyptian crisis. They are going long Brent and shorting WTI and moving in and out of that spread as developments occur in the mid East and as economic data gets released here in the US.
It is hard to say how high this spread could run, seeing it is already at record levels but since Brent is more indicative of the world crude oil price, if events were to further deteriorate acrosss the Mid-East, I can see it moving higher. On the other hand, if things look to calm down over there, this spread could also reverse rather sharply.
Stay tuned.
Posted by Trader Dan at 10:22 AM 1 comment:

The Handwriting on the Wall

It seems that more and more we are reading stories along the line of the following. Talk such as this would have been unthinkable a decade ago and yet look at where we are now. This is the result of years and years of huge trade deficits combined with out of control government spending given a further kick by money creation known euphemistically as "Quantitative Easing".

NEW YORK (CNNMoney) -- The International Monetary Fund issued a report Thursday on a possible replacement for the dollar as the world's reserve currency.
The IMF said Special Drawing Rights, or SDRs, could help stabilize the global financial system.