Currency traders are reacting to the unexpected aggressive policy action announced by the Bank of Japan this evening by coming back in droves to sell the Yen, which had been steadily moving higher lately due to safe haven flows and disappointment that had set in. The thinking had been that the new BOJ leader would not act as aggressively as some had hoped. That sure went out the window with this news!

They are basically going to be doing Y7 trillion (somewhere near $75 billion) each month of purchases of Japanese government bonds. Currently they were buying Y3.8 trillion each month. Not only that, they are going to also target longer dated bonds, something that they had not done previously with a 3 year maturity rate the longest dated bond that was purchased under their current liquidity measures.

The news also stated that the BOJ would purchase Real Estate REITS as well as exchange traded funds or ETF's in addition to aiming to increase the monetary base annually by Y60-Y70 trillion!

This is quite aggressive. I should note here that gold, in yen terms, or yen-gold as I prefer to call it, shot sharply higher and is currently up nearly 2.5% as I type these comments.

The US equity markets are following the lead of the Japanese Nikkei which ADORED the news. We will have to wait and see how today's downside reversal pattern holds up. Is it going to be yet another one or two day wonder and then back off to the upside race we go or is the S&P going to finally see something of  a deeper and more prolonged setback.

There are plenty of warning signs out there in regards to US stock  prices - the Down Transport are weaker than the actual Dow; the Russell 2000 is losing ground to the larger cap stocks, etc, all of which indicate that traders are leery of risk. This announcement by the BOJ, being as unexpected as it was, may put those fears on the back burner for now.

The key for gold will be how it handles the inception of London trade and particularly New York trade.

Today's big move lower in gold, coupled with a sharp drop in WTI crude oil and further weakness in the Continuous Commodity Index, could be the beginning of a signal change that the global economy, despite the best efforts of the Central Banks and their unlimited money creation, is entering another period of slowing growth.

Quite frankly, the commodity complex has been signaling deflation for some time now with speculative flows OUT of the base metals and some of the foods. Grain prices are working lower as the high prices brought about by last year's drought have effectively shut off demand while end users wait for much cheaper South American supplies to make their way into the distribution channel.

All the while, against such a backdrop where hard asset prices are falling, the US equity markets have been powering higher and higher. The last report I read stated that they had now reached levels exceeding the height of the Towel of Babel related in the book of Genesis and that it had gotten the attention of the market gods.

It seems as if that disconnect that I spoke to some time back between Dr. Copper and the rest of the CCI, and the US equity markets has been getting even wider; that is, until today. It looks like we might, and I want to emphasize this word "might", be seeing some reality hit these idiotic equity bulls who keep shoving prices upwards no matter what happens in this world.

I was going to post a story on April Fools Day about California experiencing "THE BIG ONE" and subsequently falling into the ocean and disappearing somewhere with Atlantis, and then relate how the "BUY TV" analysts viewed it as wildly bullish because off all the construction work it would create with dirt having to be trucked in to fill in the gaping hole that was left.

Seriously, the way the Cyprus situation was swept under the rug and quickly forgotten about, the complete ignoring of rising tensions involving that nut in North Korea, the manner in which the labor participation rate in this country keeps sinking, (just name some other negative factory) and yet day after day after day seeing a rising stock market to levels that are this preposterous, makes me wonder if the story of the Pied Piper of Hamlin was actually an allegory about today's investor/trader class.

What I find quite noteworthy today is that with all the selling pressure in the commodity complex, along with the  very weak equity markets here in the US and with rising bond prices (falling interest rates), the US Dollar was actually experiencing more selling than buying. That is interesting because even the Japanese Yen is experiencing that same idiotic safe haven buying that we see during these periods when investors get nervous. Normally that pushes the Dollar higher as well since it has been the go to safe haven for some time now. Not today. I do not know what to make of that yet but want to see some further price action the remainder of this week before commenting.  It might be just a one hit wonder.

Also, remember yesterday when I was questioning what crude oil is doing up at these levels given the lack of growth globally and rising stocks at Cushing, not to mention the weakness in the commodity complex as a whole. Well, today it got clocked and is down over 2% as I type these comments. Let's see where it ends the day before drawing too many conclusions however. 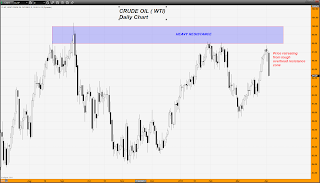 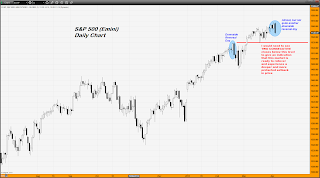 The S&P just missed putting in a downside reversal because its session high did not exceed the session high from yesterday. Nonetheless, the sell off has been strong and is coming on high volume. We have seen these fake outs before however in this market as we just had one show up on the chart a mere six weeks ago that lasted every bit of a few days before we once again went on to make yet another new high. Maybe this one is for real. We'll see.

Momentum based indicators show a definite loss of upside momentum here but they have been doing that for some time now and yet the market keeps going up. It is almost as if this thing is being shoved higher by some mysterious hand that will not let it fall. If these hedge fund algorithms ever shift into a "SELL" mode in these equities, look out! They are all on one side of the boat in a big way.

As far as gold goes, it either holds here in this support region between $1550 - $1525, or it is going to sink to $1480 for starters. With the gold stocks continuing to stink up the place, gold is losing any help whatsoever from that quarter. Central Bank buys out of Asia and elsewhere have been keeping this floor solid in the gold market so they had better not falter in those purchases or else... 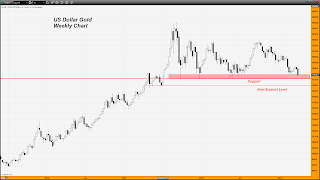 I am not even going to put up a chart of the HUI at this point as it is simply too ugly. There is a pivot region near 300 and that is more than likely where the pathetic thing is headed unless we see some spark to the gold price.

I will leave you with a ratio chart of the HUI to Gold price. It is now closing in on the 2008 low. Keep in mind, this is AFTER FOUR ENORMOUS QUANTITATIVE EASINGS attempts. What in the world will it take for these stocks to do anything if 4 rounds of QE cannot take them higher? Makes me seriously wonder if some of the gold mining companies are going to survive to be honest.

In the long run such a thing would bring less supply onto the world market which would be supportive for prices moving forward, not to mention allowing those healthy companies which remain to become more profitable. The problem is, how long is the long run going to take to get here......? 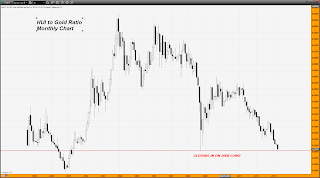