It was inevitable that the fellows from the Land of the Rising Sun would make an appearance after what has been taking place in the yen over the past month. Once it began approaching the former level at which coordinated intervention took place back in March of this year, the Bank of Japan and Ministry of Finance began hearing from Japanese industry leaders whose export markets were taking a hit. The strength in the Yen was choking off export business and the crescendo of complaints had recently reached deafening levels.

You wil recall that when the earthquake/tsuanmi struck Japan, a massive unwind of the Yen carry trade began as risk aversion escalated. In addition, there was anticipation of widespread repatriation of overseas Yen investments by Japanese citizens and businesses, especially insurance companies, to deal with the aftermath of that tragedy. The result was a surge in the value of the Yen, especially against the Dollar which resulted in a rare coordinated intervention effort by the Bank of Japan, European Central Bank and Fed all which sold the Yen and bought the Dollar in an attempt to stem its rise. They did exactly that with the yen plummeting 10% in value against the Dollar in about two week's time.

However, the currency bottomed out and had begun a slow climb higher retracing more than half of its losses about a month after the bottom was formed. While Japanese monetary authorities were taking notice, they were content to watch it meander sideways. Not until its surge that began in July did they show any signs of concern. Apparently the move past the former coordinated intervention effort was enough to get them to intervene once again.

This time they have gone it alone (ECB and FEd officials were of course notified) so it remains to be seen how effective this latest round of war between the BOJ and the speculators is going to play out.

Suffice it to say, it is this intervention which is responsible for the strength in the Dollar this evening as it had just had the props knocked back out from underneath it during the day session Wednesday once rumors of additional Federal Reserve monetary stimulus began circulating through the markets. While the Dollar is up sharply against the Yen, note what has happened as a result of this Yen intervention to the price of gold in terms of the Yen - it has soared to a another record high. It seems as if we cannot get enough monetary authorities trying to deliberately debase their currencies can we? 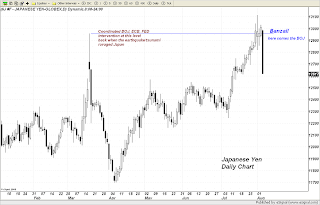 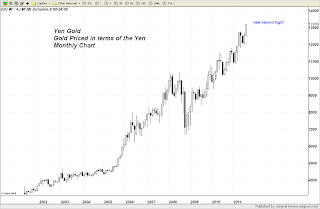 The Breach of overhead resistance at the $1650 level set up a run towards resistance at $1680, which is, for charting purposes, effectively where gold has now run. It came in a bit shy of the actual number but as you can see from the chart, has encountered likely bullion bank opposition at the level noted. 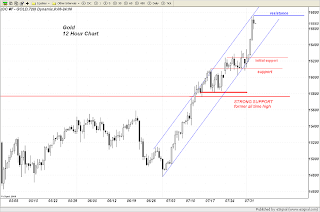 You might also note that this resistance level is very near the top of the channel that has been formed over the last month's worth of price action. The angle of ascent for gold is much steeper than it has been in the past but it is certainly no where near parabolic. It has just moved to a bit more sharper angle as investor fears have grown. Even at that, the word "PANIC" is no where yet found (it will be later).
As long as we still hear commentators and analysts talking up how "CHEAP" stock valuations have become, you can rest assured we are no where near any sort of panic stage. Just look at how eager these guys are to back up the truck and reload it once again with equities. It is as if the entire generation has been conditioned to buy dips no matter what the hell is going on in the nation or the globe for that matter. I can see them still buying up stocks when the overall national debt of the nation heads to $20 trillion, then $25 trillion and then $30 trillion. "Buy 'em". Rating agency downgrade - "buy 'em". QE 5 - "Buy 'em". QE6 - "Buy 'em"... and so on and so on and so on. We just don't believe that there is any such thing as a BEAR market - those are no longer possible in this new day and age in which the Fed can print lots and lots of money to fix everything".
Today's big rumors and pit musings were started by Bill Gross of PIMCO commenting on the Federal Reserve preparing for another round of stimulus. A couple of other folks joined in on that parade and that was enough to pull the S&P 500 back from the brink. Yep - that is just what we need - more money printing! Then again, there is no other arrow left in their quiver except that one as the federal government is not going to provide another round of stimulus (not that it would do any good anyway). It was this chatter about another round of QE that knocked the props out from under the US Dollar and took some of the wind out of the long bond today which has recently been on a one way trip due north. I think Bill must be kicking himself still on that previous Treasury bond call.
In an odd manner, Federal Reserve bond buying programs are currently being viewed as NEGATIVE for bond prices. The idea is that once its sets out the punch bowl again, no one else will be buying bonds as they will all be rushing back to get their fill of equities as they load their boats with those and dump all the Treasuries they just stuffed under their mattresses. Yes, this is called "investing" in this day and age. Madness is how I prefer to describe it as another round of QE will do as much good in curing the structurally rooted problems in the US economy as the first two rounds did - mainly NOTHING.
News flash to this gang - QE will not create jobs. It has already been tried twice and been proven to be an absymal failure. Many corporations are showing good profits but that is because some of them have eliminated their single biggest expense - their payrolls! Think about it - the combined QE1 and QE2 was close to if not more than $2.5 TRILLION Dollars and how many jobs did it create?
This is what the monetary authorities of the US economy and that of the EuroZone have been reduced to - money printing. They think that by providing liquidity they can fix years of overspending and massive indebtedness. I don't know whether to laugh at such ignorant stupidity or cry because of where these people are taking us all. I sometimes wonder if we are under a divine curse that has inflicted upon us fools for leaders and policy makers. They act as if they are somehow immune from History. Or could it be that their hubris suggests to themselves that they are actually wiser and more learned than previous generations and know how to accomplish those things which their unfortunate predecessors could not?
It really does not matter at this point as the die are already cast and the drama now waits to be acted out to reach its inevitable conclusion. Debt has consequences not the least of which is it cannot be endlessly multiplied and renamed prosperity without corrupting those who are liable for it. Perhaps I am hopelessly antiquated but I learned that it is the SAVERS and the LENDERS who hold the true power and not the CREDITORS and BORROWERS. The FORMER become the masters; the latter become the slaves.
Back to gold however - it now needs to take out today's high and plow through $1680 to set up a run at $1695 - $1700. It should find some light buying support down first near $1650 and then better support near $1625, levels at which it encountered some selling resistance of the way up. Take a look at the chart and you can see the markings.
Open interest has begun to rise again which is a healthy sign - as long as it does, the market will move higher.
Silver finally made it to its target of $42 today before setting back some. It is basically running in $2 increments so look for a move to $44 should it be able to clear $42 and hold that level. Support in silver is back down near $40 for now.
Copper has rolled over on the price chart and seems to have confirmed a top in there. Any indication that another round of QE is on the way and this market will undoubtedly reverse to the upside once again. For now it is signaling a slowdown in global growth is the dominant view.
Posted by Trader Dan at 12:53 PM 11 comments: