The following chart is a weekly graph of the price of unleaded gasoline showing some lines that detail areas where both resistance and support can be identified.

As you can clearly see, the price has rallied some 70 cents snce the end of last year without hardly a pause. It is currently closing in on a very important chart inflection point which is just shy of the $3.20 level. Based strictly on technical analysis and nothing fundamental, if this market pushes past that point (notice it is knocking right on the door of the lower line of the pitchfork - which is where it can be expected to encounter selling pressure), then not only will it have bested upsloping resistance but it will also have taken out horizontal resistance coming in near that level as well. 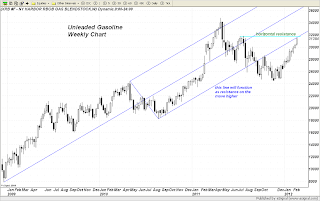 That would give us a technical signal that this market is going to make a run towards the all time high. I wish to emphasize again, that we are no where near the peak driving demand season for gasoline which generally coincides with the advent of the Memorial Day holiday.
Gasoline is obviously pricing in a risk premium in an attempt to pre-emptively ration supply fearing a drop in oil shipments out of the middle East should tensions with Iran further ramp up. However, this rally began prior to such fears initially moving higher in anticipation of a near zero interest rate policy of the Federal Reserve and additional liquidity being supplied by the Central Banks of the West. Even China was not left out of the equation with many traders suspecting that the Chinese would lower interest rates or reduce bank reserve ratio requirements as they indeed did.
What to bring away from all this? Simple - get ready for the very real prospect of all time high prices at the gasoline pump this summer.
By the way, Newt Gingrich has an outstanding presentation at his website for bringing down gasoline prices, permanently, and for sharply reducing American dependence on imported oil. Check it out.

Also, if you did not get a chance to see the current President's logic-challenged speech on US energy yesterday, relax; you spared yourself a great deal of mental anquish trying to follow his convoluted thinking. The Wall Street Journal has an excellent take on that speech which is also worth reading. You can find that at the following link: It is entitled, "Stupid and Oil Prices". I especially liked the fact that the writer brought up the pernicious effect of the Fed's near zero interest rate policy on the price of energy, and commodities as a whole. It was and is a very insightful read.


Take a look at what has been happening to the Commodity Complex as illustrated by the CCI. The index has been in a downtrending pattern since it peaked late last spring. It is however showing some definite signs of bottoming and what is more, possibly begin a trending move higher (remember that a market can bottom without necessarily embarking on an uptrending move higher - it can merely go sideways).

The first solid chance of seeing such a thing would be an index close above the horizontal blue line noted on the chart. Upside follow through that takes out the lower upsloping red line would be then very bullish activity. 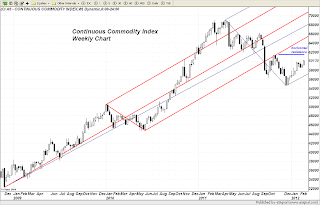