This week's strong showing in the HUI went a long way to improving the technical posture of its weekly chart. Last week, ending January 28, the index had moved down into a strong level of horizontal chart support in the region bounded by 490 - 500. Having bounced from that level it then saw additional upside price action this week which pushed it off of the rising 40 week moving average (the dotted line) and took it up into the 20 week moving average where it encountered some selling.

The index is holding where it needs to hold in order to keep the long term trend intact.

Take a look at the RSI indicator shown below the price chart. This is the Relative Strength Index, a useful tool for gauging the internal strength or lack thereof within a market. Generally speaking, a market is in a bullish technical posture according to this index if the index moves within a range of 40 on the downside and 80 or higher on the upside. I use 70 on anything weekly related to gold as I have found it a better number to work with on the topside. Note that since December 2008, the weekly RSI reading on the HUI has worked between these two levels noted above. As long as the RSI stays above 40, the index will remain in a bullish posture.

As you can also see, prior to the trending move to the upside back in October 2008, the RSI had dipped as low as 25, indicating the bearish psychology that was still at work in the mining shares universe.

You can also note that during an extended sideways move which is one that leans towards a bullish slant, the RSI number, will generally work between 60 - 40.

An additional confirmation of the longer term bullish picture is the fact that the HUI has been running along the 50 week moving average as its lower boundary and has found buying in that general region of the average on retracements lower in price all the while the RSI has maintained its footing above the 40 level.

We will continue to monitor this on a weekly basis to see how it fares as we move forward into the year. 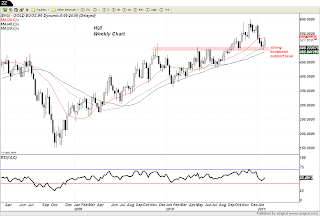 Posted by Trader Dan at 8:37 PM No comments:

Email ThisBlogThis!Share to TwitterShare to FacebookShare to Pinterest
The big development in today's market session was the breakdown in the long bond. As you can see from the chart below bonds have been carving out a 5 week old sideways trading pattern bounded by approximately 122 on the topside and 119 on the downside. All sharp sell offs down to the latter level had met with buying that brought them back up to the top of the range where sellers once again surfaced. This impasse continued for more than a month with buyers looking to the Fed's entrance into the market during its timed purchases of longer dated Treasuries in association with its QE2 program. Sellers were looking at surging commodity prices and other signs of upticks in manufacturing activity and retails sales numbers which suggested that the constant pump priming was producing some impact on the overall sluggish economy.
A thing to bear in mind from a technical aspect is that the longer a market runs in a sideways pattern, the more significant the breakout tends to be when once it occurs, no matter whether that be to the upside or to the downside. In the case of the bonds, the breakdown was to the downside. I should also note that volume on the sharp move lower was very heavy, always a good sign that the move is legitimate.
Followthrough early next week will be important to see that this was not a one day wonder and that it is indeed the beginning of a major trending move.
If it is, what is so remarkable is that it is occurring in the face of total Treasury purchases of some $600 billion as announced by the Fed back in November. The entire purpose of that program has been to move long term rates lower and help with the dismal housing market and real estate sector which needs the low rates to boost demand so as to mop up the huge overhang of houses and properties hanging over this sector of the economy. With today's breakdown of the 5 year on out to the long end, interest rates are headed in a direction completely opposite than what the Fed has been intending! 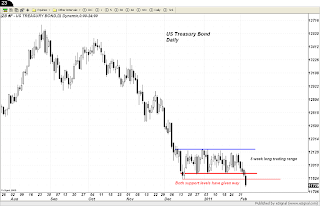 Posted by Trader Dan at 6:10 PM No comments: