The FOMC announcement this afternoon sent the equity markets into a complete turnabout from yesterday's big selloff. The catalyst? Try the fact that the Fed said that the economy is so weak that interest rates will not be raised until at least the middle of 2013 - a full two years away! That acknowledgement, namely, that growth is so sluggish, the economy so moribond and unemployment so chronically high, sent money flowing into BOTH stocks and bonds at the same time.

How's that for a neat trick by the boyz at the Fed?

Here is the deal - the FOMC is attempting to drive money out of bonds and INTO equities based on the fact that they have guaranteed practically no return as far as yields go on short term Treasuries for at least two years. Think about that. As an investor would you want to lock up money for that long for that kind of yield or would you want to buy stocks and attempt to capture a bit better return on your investment capital. After all, something beats nothing as far as returns go, especially if you think that this easy money policy is going to feed into further asset appreciation as the Dollar further succumbs to the news. Forget about the ECB's quasi QE program to buy up Italian and Spanish debt. The Euro was bought like mad while the Dollar was pounded lower as the Fed is obviously sacrificing the Dollar in an attempt to keep a low interest rate environment in which stocks are rising. That is at least, what they hope to create. I suspect that they are going after higher equity prices in an attempt to gin up confidence in the US economy by creating a rising stock market. What more can I say than YIELD. Here we go again - chase and chase yield.

On the technical chart, after plowing through the 38.2% Fibonacci retracement level last evening in Asian trading, the S&P shot right back through it to the upside, at the exact moment in time that it needed to I might add. The next target for the bulls will be to take this index back through the 1200 level. Should they be able to do that, then they have a legitimate shot at taking price back towards the former broken support level at the 1250 level. 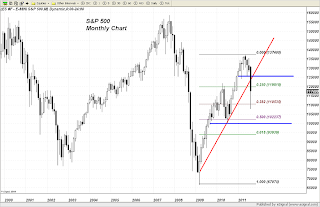 I would watch the US Dollar very closely right now as a result of today's FOMC statement. I am coming away with the idea that they are now resorting to currency debasement but in a manner in which it is not so obvious as if they had just come out and said, "We are going to do a QE3". They have effectively told everyone that there is not going to be any growth worth speaking of for the foreseeable future in the US economy and that therefore yield on US Treasuries will be very low. They are also now counting on the market to take this idea of slow growth and bid up the back end of the yield curve without fear of the inflation monster. This is going to be an interesting exercise to observe. 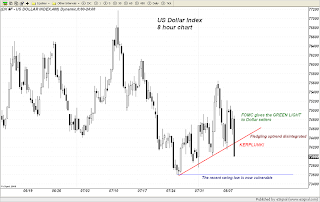 Can the Fed manage to induce investors/traders to plow into stocks without having them also plow money into the commodity sector. If Bernanke and company had come right out and announced another attempt at QE3, commodity prices, particularly energy prices would have shot up immediately producing that same dampening impact on the consumer and the overall economy that it did during QE1 and QE2. By taking this line of approach, the Fed is hoping to convince market players that growth in the economy will be so slow that there will be no increasing consumer or business demand for energy and thus no reason to bid up the price of crude oil and thus gasoline. Same goes for food prices. We will simply have to wait and see how this plays out but for today at least, they managed to take equity prices up while taking commodity prices down. After the linkage we have been seeing between the two for both QE's, this is no mean feat. 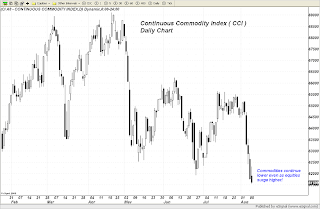 The following chart is more for informative purposes than for trading but I did want to note that using the Federal Government's CPI data, (which is of course deliberately designed to underestimate the true rate of inflation), gold has effectively reached its all time high in terms of a monthly closing price in inflation adjusted terms. Whether or not this induces some profit taking among longs, particularly as global equity markets are now at this hour experiencing a rather sharp upside recovery after yesterday's pounding is as yet unclear but if we see a strong short squeeze in equities, watch for some profit taking to occur in gold. Already the metal is some $30 off its best levels of the evening.

We might also see a recovery in the gold mining shares if this rally continues into the New York trading session as those were moving higher yesterday before they succumbed to the general wave of equity selling. 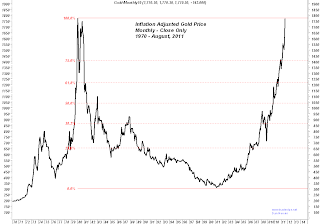