Talk today was all about the resurgence of fears related to the situation in Cyprus. The US equity markets were heavy throughout the session as a result but from what I could tell, there was not that much demand for safe haven US Treasuries. Yes, those were higher but considering the extent to which the concerns surrounding Cyprus were in the headlines, I would have expected a much stronger tone to the US bond market.

Also, remember when the news first broke over Cyprus over last weekend and the markets opened for trading Sunday night here in the US. The Euro was absolutely mauled as a result. Today, while it was weaker, it refused to stay below the 1.29 level. From what I can see, there apparently is not that much worry over the Europe if the common currency will not stay down below 1.29 on the Cyprus news flaring up again.

Like I and many others have said - there is nothing rational about markets, not any more.

Gold caught a firm bid today and managed to stay above $1610 for most of the session which is promising. It needs to prove it can clear resistance near $1620 if the bulls are going to be able to seriously squeeze that extremely large hedge fund short position. Frankly, I am not sure what it is going to take to push gold through this level if the Cyprus news and the reverberations related to that cannot do it. Whoever it is that is doing the selling up near the session highs is strong handed and will take some serious force to dislodge.

Gold in Euro terms is showing signs of life having broken out to the upside of its downtrending channel. It is no longer making a series of lower highs and lower lows but has stabilized and looks to have forged a bottom. With Yen gold strong, Sterling Gold looking decent and now Euro gold joining the chorus, the bears will have to dig in deeply to prevent the respective overhead chart resistance levels from giving way. We know that there is a deep pocketed seller present in New York - is that the only place?

Resistance in Euro Gold is near today's high at 1250 followed by 1270 and then 1280. After that, Gold has a shot at testing psychological round number resistance at 1300 euros. 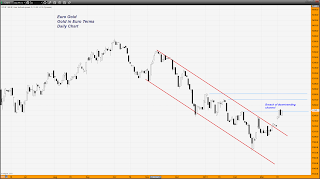 U S Dollar priced gold is shown below on a two hour chart where the selling effort can be more clearly seen. 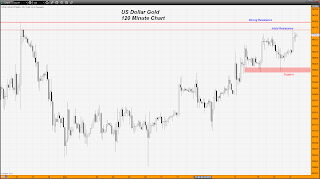