US Dollar on the Receiving End of Safe Haven Flows

As much as it pains me to write the words, US Dollar and Safe Haven, in the same sentence, the rush into the Dollar is evident as the fallout from the US election, combined with fresh fears surrounding Greece and other parts of the EuroZone continues unabated at this point.

This is perhaps one of the main reasons that the big shorts over at the Comex have been able to thus far stymie the yellow metal near the $1740 level.

Note on the chart below that the US Dollar is working steadily higher after having managed a strong push through a heavy resistance level near the 80.50 region. It has now pushed to the 100 day moving average, a level at which we would expect it to encounter some profit taking by speculative longs in the market. However, the above mentioned combination seems to be preventing any serious long liquidation at the moment as traders are more interested in owning the Dollar, warts and all, than they are the Euro at the moment.

Note also that the 20 day moving average has now crossed firmly above the 50 day moving average which is also flattening out and now looks as if it too wants to turn higher. There is an additional bit of chart resistance coming in near the 81.75 level that might stem its advance should the bulls keep pushing it higher. 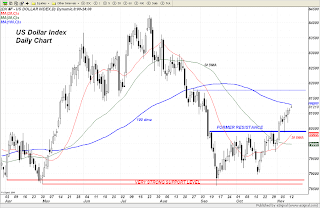 The point I wish to make here is that the broader US equity market is continuing to head lower as the election results have guaranteed a decidedly unfriendly business climate for the foreseeable future. I am writing this during the Asian session but the S&P 500 is trading lower and once again looks as if it wants to test that critical 50% Fibonacci retracement level of the rally beginning earlier this past summer. If the bulls cannot force a quick rebound as they did last Thursday, the index will more than likely drop to at least the 1343 level. 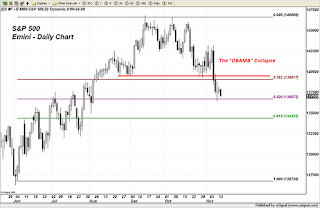 With some of the risk trades being removed, the US bond market is also moving higher shoving interest rates lower in the process. The long bond is back up in nosebleed territory as it is once again testing the all time highs. Clearly, the SLOWING GLOBAL GROWTH THEME is back into play, again, for the umpteenth time. It seems as if we are never to be rid of this damned incessant tug of war between the deflationists and the inflationists. Now that the US public has voted for 4 more years of the same crap, it is difficult to see any of this changing meaning we are going to have another 4 years of incessant volatility and more market madness as the Fed fights the forces of deflation. 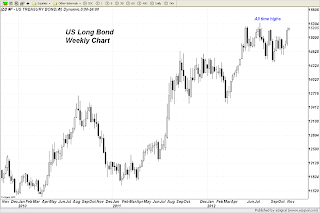 Look at what has happened to the yield on the Ten Year Treasury Note once again. If you want to know which side is prevailing in this battle between the deflationists and the inflationists, just keep an eye on this chart as it will tell you all that you need to know. 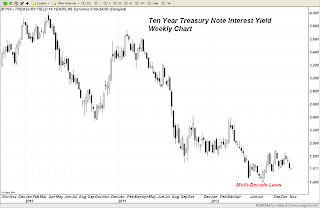 One last chart, it is a gold to S&P 500 ratio chart. It is evident which of the two has been the better long term investment. A rising line means that gold is outperforming the broader US stock market. The S&P 500 has outperformed gold during some brief intervals through a good portion of 2009 and especially in the second half of last year but since the middle of this year, gold has been holding up much better than the stock market. 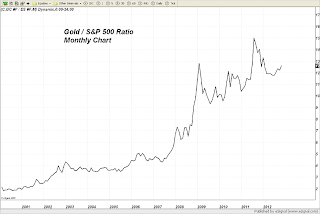 Gold continues to attract more sellers than buyers near the $1740 level once again reinforcing that zone as the next important chart resistance level that needs to be taken out if the market is to have a legitimate chance of making yet another run to $1800.

At the present time, it continues to retreat with dip buyers planning their next point of entry. Keep in mind that a lot of guys were leery about chasing this market higher after it first collapsed in price about 10 days ago and then came roaring back after the US election. That sort of extreme volatility is enough to chase away even the most battle-hardened of traders.

There should be a pretty good floor of support as the market descends lower towards the $1700 level. 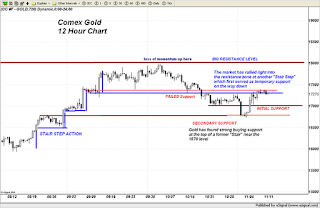 Talk of an Amicable Divorce Picking up Supporters

Last week I penned a commentary noting what I believe to be an irreconciliable division growing within these DisUnited States of America. That division, in my opinion, cannot be bridged because it includes TWO MUTUALLY EXCLUSIVE political ideologies.

One consists of a vision of limited, Constitutional government, as bequeathed to us by our Founding Fathers, and which gave rise to the most free, most prosperous and most generous nation that this planet has ever seen or will likely ever see again.

This philosophy has at its core the ideas espoused by John Locke, namely, natural law and that which flows from it. I might add here that under this system, men are free to PURSUE HAPPINESS, not necessarily achieve it.

The other consists of a vision of an increasingly powerful and intrusive centralized government, patterned after the current European statist model, in which the idea of God-given, unalienable rights is a foreign and outdated concept. Under this model, the rights of the individual take a back seat to some current notion as to what is in the best interests of the majority of the people, which notion is of course to be decided by the current holders of political power.

The latter vision has as its roots the rallying cry of the 18th century French Revolution; "Liberty, Equality, Fraternity". Under this vision, government or the state exists to be the "GREAT LEVELER", removing inequities in wealth and producing EQUALITY amongst all the citizenry. Inherent in this theory is the concept that those who are wealthy have achieved their wealth and success at the expense of the wealth and happiness of others who are not wealthy. This is where the rise of class warfare and the pernicious theories of Marx have their origin.

While I understand how startling and how shocking it must be to some to hear talk of the dissolution of the Union, I am only stating the obvious - the two sides in this nation are in a state of near perpetual hostility towards each other because the ideas that they espouse are repugnant to the other side.

Instead of the melting pot, "E Pluribus Unum", (out of many, one), America is being Balkanized along lines of ethnicity, class, gender and a host of special interest groups. Public sector unions are now clearly pitted against those whose taxes pay for their salaries and benefits causing further resentment and further fueling the flames of resentment against their feeding at the public trough.

Time constraints prevent me from further detailing the growing divisions in this nation but suffice it for now to say that more and more there is talk of an amicable divorce between the various states in this union. This is not something to be taken lightly. Can anyone imagine this sort of thing a mere 20 years ago? Talk of separation is a last resort, an idea born out of complete frustration. Even at that, amazingly, there are now TWENTY separate petitions from the citizens of TWENTY SEPARATE states to the White House requesting a peaceful separation from the Union. Interestingly enough, by the White House's own rules, any petition reaching a required 25,000 signatures is required to be considered by a committee.

In the time that it has taken me to pen these comments, the petition from the state of Texas has already garnered another 400 signatures ( I am not that fast of a typist). The petition from Louisianna, which seems to have been the first of these petitions, is well on its way to reaching the necessary 25,000.

I think it can be safely said that these petitions will be given about 15 seconds of consideration by the current administration before being rejected but the mere fact that this sort of thing is becoming more acceptable to a growing number of citizens, is evidence that this nation is going down the same path that led to the breakup back in 1861.