HUI showing some Signs of Life

That the precious metals mining shares, as evidenced by the HUI, have been a disappointment to their holders, is certainly an understatement. The HUI registered a loss of 13.2% last year in 2012. It did manage to recover from its worst levels having sank below the 380 mark at one point although that was little consolation to those who are long term holders of the shares and did not sell after the chart pattern broke down in the fall of last year.

That being said, there are some signs of life in the sector based on the chart analysis of the HUI. Take a look at the following chart that contains one of my favorite indicators, the old, reliable RSI or Relative Strength Indicator.

What I have constructed is a simple 3 day moving average of the actual RSI indicator itself in order to smooth out the signal line and eliminate the sharp spikes. Do you see what is happening? 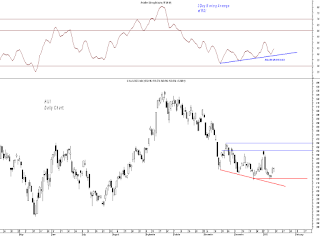 Following the breakdown from the September high, as price descended, the RSI followed it lower in a rather smooth fashion. Lower prices on the HUI were matched by lower levels on the RSI. That continued until the middle of November when the index caught a bit of a short covering pop that looked as if it might put an end to the decline.

However, the rally lasted no longer than 5 days and prices began to move lower again. However, the increase in the number of up days even as price worked lower began to be picked up by the indicator as it no longer marched lock step in union with price itself. As a matter of fact, the indicator has begun registering a SERIES OF HIGHER LOWS even as price has been making a series of LOWER LOWS. In other words, a near perfect textbook case of BULLISH DIVERGENCE is appearing.

This is a clue that perhaps the sector is getting ready to experience an upmove and finally reverse the downtrend. It should be noted that this is just a POSSIBILITY of an upward move occuring, not a certainty.

What needs to occur to confirm a definitive bottom is that an overhead resistance level must be taken out, preferably with good volume across the various gold shares that comprise this particular index.

Let's wait and see what develops. For the time being note that were price on the HUI to fall down through support near 420 and be unable to recover that level on an intraday basis or by the next day of trading, the pattern would be negated and one would have to wait for further price action to decipher what comes next. 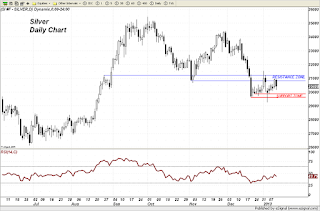 Silver has been stuck in a range trade for the last month with selling entering on approaches to $31 and beyond while buying has appeared on moves down to $30 and lower.

The RSI or Relative Strength Index has been stuck in a range between 65 on the top and 30 on the bottom. The indicates a market within a consolidation pattern with a bit of a friendly bias to it. It's ability to remain above 30 on the RSI suggests that the next move will be to the upside although it will need to push past that stubborn overhead resistance zone noted on the price chart in order to do so.

I think that as long as Copper, Palladium and Platinum continue to look strong on the price charts, the Silver bears are going to have their work cut out for them in breaking down the support zone noted. Also, it is difficult to conceive of this market falling apart with equities continuing their upside party.

Any move through the late December high near $31.50 will spark a strong wave of short covering.