Every now and then you come across an article that is well worth the time spend in reading it. The following in the Wall Street Journal is such an article.

Talk about perspective! This is from a man who is on the front lines of the employment situation in this nation.

This goes back to some of my comments related to QE and why I believe it is going to be next to impossible for the Fed to stop or taper that program until we get STRUCTURAL REFORMS. I take the Fed at its word right now that until the employment picture improves, they are not going to taper and quite frankly it will not as long as the Obama administration is in power and Obamacare is the law of the land. The thing has not even been fully implemented yet and it is already leaving a wide swath of devastation across the nation's job market. Don't believe that? Then read the following article.

Bob Funk: Where the Jobs Are—and How to Get One


The man who matches companies with workers talks about the skills gap, the harm from ObamaCare, and the incentive not to work. But he'll still find you a job.

By Stephen Moore
Here's something you don't often see in Washington: a businessman trying to repeal a law that helps his company. That's Bob Funk's latest mission in life. He's the president and founder of Express Employment Services, the fifth-largest employment agency in America, with annual sales of $2.5 billion and more than 600 franchises across the country. This year he will place nearly half a million workers in jobs.
"ObamaCare has been an absolute boon for my business," he says as we sit in his new office headquarters near downtown Oklahoma City. "I'm making a lot of money thanks to that law. We're up 8% this year. But it's just terrible for the country. I see that firsthand every day."
Posted by Trader Dan at 9:39 AM 9 comments:

One of the points I have been making about gold is that its recent gains at the Comex have been primarily driven by short covering by large hedge funds and not by the influx of fresh investment demand coming from this same group.

Whether we like it or not, the main driver of our modern markets is this hedge fund community. It is their buying and selling which moves the markets. Once upon a time the big 800 pound gorilla in the commodity markets was the Commercial category. Not any more - while the Commercials are always a force to be reckoned with, as they are generally on the opposite side of the trade from the hedge funds - these Hedge Funds are now the big boys on the block. Ignore them at your own peril.

That being said, those guys are paper pushers. They LOVE paper; they ADORE paper; they DREAM paper. In other words, they are not the least bit interested in obtaining physical supplies of much of anything as most of them are not set up for storage and other associated costs. This is one of the reasons they love the paper gold ETF's. They can flex their financial muscles and buy boatloads of these investment vehicles when it suits them or when it does not suit them, sell boatloads of the same.

What troubles me about gold right now is the lack of interest on their part to own the paper gold ETF, the largest being the SPDR Gold ETF or GLD.

Take a look at the following chart of the reported gold holdings of this enormous ETF. I have posted this chart before on my site here to demonstrate the lack of investment demand coming from the West in regards to gold. Yes, gold demand is very strong in Asia but gold needs this Western investment demand IF IT IS TO TREND HIGHER. It is NOT GETTING THAT. That is a problem if you are a bull.

Even with the recent announcement by the FOMC that the Tapering option is supposedly off the table for a while longer, it seems as if GLD is not attracting any new strong inflows of money. The tonnage is noted on the left hand side of the chart. Notice that it continues to hover near the 900 ton level and has not been able to climb back above the 1000 ton level for some time now. It might be stabilizing here but the jury is still out.

I am not sure when this will change but change it must if we are going to see gold embark on a new leg higher. 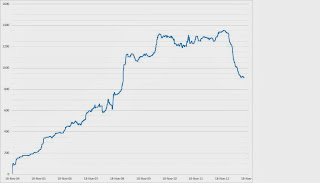 Please click on the following link to listen in to my regular weekly audio interview with Eric King over at the KWN Weekly Markets and Metals Wrap. We will be discussing this past week's "Yo-Yo" type price action in the metals.