One of the reasons that leveraged carry trade positions explode is a rally in the underlying currency which has financed the trade. In this case, it is the Japanese Yen which has been the funding currency. Those who put on this sort of trade are effectively short the Yen because when they exit the trade, they have to close out the positions that they financed and then buy Yen to pay back the original loan in Yen terms. As the funding currency rallies, they begin losing money because they are forced to pay a higher price for the Yen when they do the foreign currency exchange.

When we saw the Yen begin rallying sharply this past week it set off a cascade of unwinding of the carry trade as hedge funds dumped both stocks and commodities that had been purchased and then leveraged up as risk trades were quickly going underwater.

It now appears that the Bank of Japan has secured the cooperation of the entire G7 in knocking down the Yen which most agree had soared to levels that were nowhere near commensurate with an accurate valuation of the currency given the fiscal condition of the nation.

If it now appears that the G7 agrees to keep the Yen at bay then it could well be that the same hedge funds that were blowing out of their carry trades will be eager to reinstate them since they will feel that they have an effective upside cap on the Yen thus eliminating an element of risk in the trade.

If the nuclear plant situation in Japan can indeed get stabilized, that, combined with the cap on the Yen, could be the signal for the hedgies to pile back into the carry trade. It would not surprise me to learn that the BOJ would actually welcome such an event because it would keep a lid on the Yen and would thus serve their purposes of preventing the Yen from strengthening.

I would therefore view this as setting in place the factors necessary for keeping gold and silver well supported in price again. We will see how the market is interpreting these events in the trading that takes place over the next few trading sessions.
Posted by Trader Dan at 6:00 PM 6 comments:

Bank of Japan Ventures forth to punish the Speculators

The Chart picture says it all. This time however it is not a unilateral move by the BOJ. It is a coordinated G7 takedown of the Yen. About time! 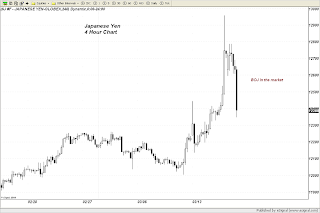 Even the Government's Phony CPI can no longer hide Rising Prices

The Labor Department released its CPI numbers for the month of February this morning. Guess what? Even the statistical gymnastics employed by these masters of illusion could not conceal what has been happening to food prices since the middle of last year. Ask any average US housewife and you would have already known this long before the CPI revealed it but the doubling of grain prices, the surge in wholesale beef and pork costs, rising prices for cotton, etc, were bound to show up sooner or later at the retail level.

As said many times here, a business can only absorb rising wholesale costs for so long. If it wants to remain in business, it must eventually pass these increases on to consumers, especially if it intends to actually increase its hiring.

While some food costs are coming down on the futures markets due to events in Japan and the exodus of a significant amount of speculative demand, it is reasonably sure that as long as the QE comes from the Fed and now more than likely from Japan, inflation in food and energy prices is not going to go away anytime soon.

Consider also the fact that the US Dollar continues to fall on the foreign exchange markets. This is going to have the effect of making imported goods more expensive for American consumers.

Higher gas and food costs push up consumer prices up 0.5 pct., most in nearly 2 years

Gold is stronger today but is having difficulty moving above $1402 and holding that level. For now it is attracting selling here even with the weakness in the US Dollar. 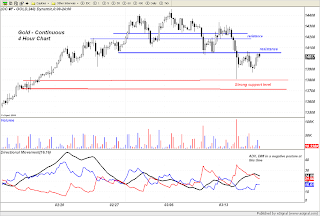 The Dollar is Flirting Dangerously with a Major Support Level

Risk trades are being put back on in today's session with a fury - markets which had been limit down this week and now limit up today. Corn and Cotton are two in particular which stand out. That's the thing about the hedge funds - they are either selling everything in sight or buying everything in sight. Hogs are pushing towards limit up also after being smashed limit down earlier this week. In short, the risk trades are being put back on with the same fury as they were being abandoned earlier this week.

Interestingly enough, the Dollar is getting slammed lower as all of the majors, with the exception of the Australian Dollar are trading higher, in some cases, sharply higher, against it. This fits with the pattern that I have detailed previously about the very weak response of the US Dollar to the safe haven play or the move towards risk aversion. It simply did not have the kind of upside strength that one would have expected during a time of crisis. That lack of strong move higher underscored what I believe is the inherent weakness in the greenback. Simply put, the Dollar looks sick.

The Yen makes up nearly 14% of the basket of currencies that comprise the USDX and its massive rally explains some of the weakness in the Dollar but the fact is the Dollar has not performed in the manner which many of us are accustomed during times of uncertainty or fear among global investors.

If the Yen is knocked down sharply by the BOJ, that will provide some strength to the Dollar index but that had better happen fairly soon or the Dollar is not going to hold this major support level near 76 that it is perched precariously above. All eyes still continue to wait for the BOJ. 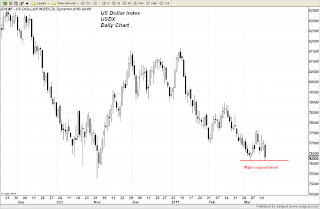 Posted by Trader Dan at 8:39 AM No comments: