Gold shares Continue to Underperform against the Metal

There remains very strong interest in the gold ETF's, interest which I might add is aiding the strength in the metal; however, this interest is a double-edged sword as the ETF's continue to siphon off money flows that would have, in times past, found their way into the mining shares. The result - continued underperformance by the mining shares in general against the price of gold bullion.

Notice from the chart that with a bit more than a month to go in the year, the HUI to gold ratio is sinking back down towards its recent lows and looks to finish the year on a very sour note.

Back in July of this year, the MONTHLY CLOSING price of this ratio was the lowest close for any month going all the way back to January 2002. Even the two spike lows that occurred during the worst of the credit crisis, which erupted in the summer of 2008, managed to see those two months recover well off their worst levels and close higher than this year's July close. 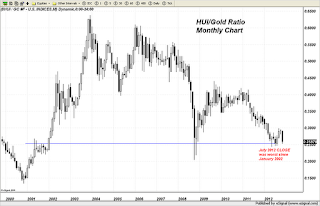 Something is going to have to occur within the industry as we enter into the new year or I believe even some of the long-term holders of the gold shares are going to begin to take a good, hard look at maintaining their holdings. Investors put their capital into a company because they are looking for return on that investment. If they can find better returns in an ETF, they are going to make the move there. That is just a simple fact of investor life.

Email ThisBlogThis!Share to TwitterShare to FacebookShare to Pinterest
A good response to those who continue to denigrate the secession movements...

For decades, it has been obvious that there are irreconcilable differences between Americans who want to control the lives of others and those who wish to be left alone. Which is the more peaceful solution: Americans using the brute force of government to beat liberty-minded people into submission or simply parting company? In a marriage, where vows are ignored and broken, divorce is the most peaceful solution. Similarly, our constitutional and human rights have been increasingly violated by a government instituted to protect them. Americans who support constitutional abrogation have no intention of mending their ways.

Since Barack Obama's re-election, hundreds of thousands of petitions for secession have reached the White House. Some people have argued that secession is unconstitutional, but there's absolutely nothing in the Constitution that prohibits it. What stops secession is the prospect of brute force by a mighty federal government, as witnessed by the costly War of 1861. Let's look at the secession issue.
At the 1787 constitutional convention, a proposal was made to allow the federal government to suppress a seceding state. James Madison, the acknowledged father of our Constitution, rejected it, saying: "A Union of the States containing such an ingredient seemed to provide for its own destruction. The use of force against a State would look more like a declaration of war than an infliction of punishment and would probably be considered by the party attacked as a dissolution of all previous compacts by which it might be bound."
On March 2, 1861, after seven states had seceded and two days before Abraham Lincoln's inauguration, Sen. James R. Doolittle of Wisconsin proposed a constitutional amendment that said, "No State or any part thereof, heretofore admitted or hereafter admitted into the Union, shall have the power to withdraw from the jurisdiction of the United States."
Several months earlier, Reps. Daniel E. Sickles of New York, Thomas B. Florence of Pennsylvania and Otis S. Ferry of Connecticut proposed a constitutional amendment to prohibit secession. Here's my no-brainer question: Would there have been any point to offering these amendments if secession were already unconstitutional?
On the eve of the War of 1861, even unionist politicians saw secession as a right of states. Rep. Jacob M. Kunkel of Maryland said, "Any attempt to preserve the Union between the States of this Confederacy by force would be impractical, and destructive of republican liberty."
The Northern Democratic and Republican parties favored allowing the South to secede in peace. Just about every major Northern newspaper editorialized in favor of the South's right to secede. New York Tribune (Feb. 5, 1860): "If tyranny and despotism justified the Revolution of 1776, then we do not see why it would not justify the secession of Five Millions of Southrons from the Federal Union in 1861." Detroit Free Press (Feb. 19, 1861): "An attempt to subjugate the seceded States, even if successful, could produce nothing but evil -- evil unmitigated in character and appalling in content." The New York Times (March 21, 1861): "There is growing sentiment throughout the North in favor of letting the Gulf States go."
There's more evidence seen at the time our Constitution was ratified. The ratification documents of Virginia, New York and Rhode Island explicitly said that they held the right to resume powers delegated, should the federal government become abusive of those powers. The Constitution would have never been ratified if states thought that they could not maintain their sovereignty.
The War of 1861 settled the issue of secession through brute force that cost 600,000 American lives. Americans celebrate Abraham Lincoln's Gettysburg Address, but H.L. Mencken correctly evaluated the speech, "It is poetry, not logic; beauty, not sense." Lincoln said that the soldiers sacrificed their lives "to the cause of self-determination -- that government of the people, by the people, for the people should not perish from the earth." Mencken says: "It is difficult to imagine anything more untrue. The Union soldiers in the battle actually fought against self-determination; it was the Confederates who fought for the right of people to govern themselves."
Walter E. Williams is a professor of economics at George Mason University. To find out more about Walter E. Williams and read features by other Creators Syndicate writers and cartoonists, visit the Creators Syndicate Web page at www.creators.com.
COPYRIGHT 2012 CREATORS.COM
2

Dr. Williams serves on the faculty of George Mason University as John M. Olin Distinguished Professor of Economics and is the author of 'Race and Economics: How Much Can Be Blamed on Discrimination?' and 'Up from the Projects: An Autobiography.'
Posted by Trader Dan at 10:22 PM 8 comments: