Gold still stuck in a range 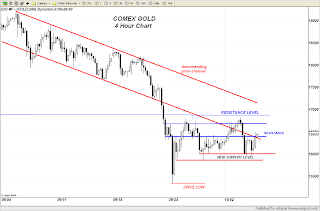 Gold has thus far found willing buyers on forays down below the $1600 level. So far, so good. However, it is still effectively range bound until it can at least push past the $1680 level topside. It ran into resistance near $1650 in today's session but has been holding relatively firm as we enter early Asian trade this evening. Downside support is indicated on the chart in the region bounded by the solid red lines.
It seems everytime we get the least whiff of more bailout or rescue talk coming out of Europe, up go the Equity markets, most of the commodity markets and of course, gold. That happens mainly because down goes the Dollar and up goes the Euro. Quite frankly there is nothing more disgusting to a trader than sitting around waiting for some fresh fundamental news to come out of some monetary official's mouth because you never know what the hell words of "wisdom" that they are going to come up with next, which words I might add will either immediately sink your trading account into the netherworld if you guessed incorrectly or make you look like a veritable wizard.
If it is the latter you can wait by your phone for a call from Jack Schwager to include you in his next sequel to Market Wizards where you can pontificate about your expertise and what you look for in a market when the truth is you just happen to be one lucky SOB.


On the other hand, if you guessed it wrong, they have another category of book that they can include your name in. It is called, Famous Trading Recipes, under the heading of Road Pizza, because that is what you will look like if you were on the wrong side and could not run quickly enough to prevent yourself from becoming steamrolled by eighteen gazillion hedge fund managers whose computers all hit the market at the same moment in time.
Seriously, we are back to trading whatever the hell is coming out of Europe next. Who knows what the final package, if any, will look like. All I do know is that once again, just about the time every technical indicator on the planet turned to the sell side in the S&P 500, with headlines flashing the official entry into a Bear Market, up goes the S&P as if nothing happened once again punishing all the short sellers for their impertence in daring to sell stocks in the financial markets of the US. Tsk, Tsk, boys - did you not know that such activity is unpatriotic at best and treasonous at worst?
Truth be told the monetary authorities of both Europe and the US are terrified of the price charts and probably watch them more closely than we traders. They simply cannot have them casting off belittling signals as to the health of the economy.
Chalk up the rally in the gold shares to this huge short covering squeeze that hit the broader markets. No matter what the real reason is, the fact is that from a technical chart standpoint, the HUI needed to move higher immediately after yesterday's shellacking and it did. It climbed back over the 520 level so if it goes out to end the week above this level, that will be considered a major victory for the bulls. It will need to get its rear end above 540 to get anything of note going to the upside.
The Dollar retreated from the 80 level once again on the USDX but that will not matter if Europe fails to come through and deliver on their stability mechanism. By the way, I love the fact that we have an Exchange STABILIZATION Fund here in the US and they have a STABILITY mechanism over there. Call me a purist but since when did the damn government have the right to interfere in any markets to make them more "stable". My view is that ALL of the instability currently in these markets is being caused by the government. If they got the hell out of the way we would actually have a TREND and it would be a STABLE one. The only problem for them is that the trend would be DOWN. That is something that these meddling clowns cannot tolerate. That is where the instability is coming from (traders trying to guess what these fools are going to do next). 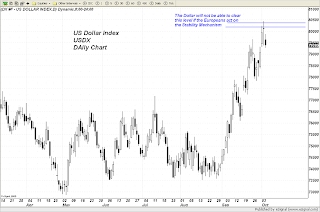 So whatever you do, do not call the current system in place in our financial markets CAPITALISM. This has nothing to do with capitalism and everything to do with Statism and Central Planning. I bet we would have already seen this entire mess cleaned up by the market if the central planners and meddling busybodies had not stuck their noses into it.
That is my soap box rant for today.
Posted by Trader Dan at 4:31 PM 16 comments: