The XAU and the HUI are both showing some good resilience at these levels. Three times over the last 4 trading sessions the XAU has bounced from off the level near 193. It is can take out 200, it should spark some short covering which will be indicative of the shares moving a bit higher from current levels as they are grossly oversold. 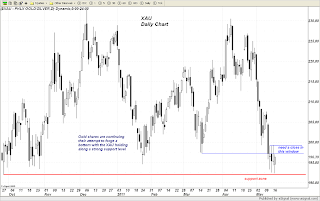 Gold is rangebound as is silver as it continues to attract buying on forays down towards $1480 and below. It has resistance at the top of its range coming in first near $1495 and then again up near $1510. 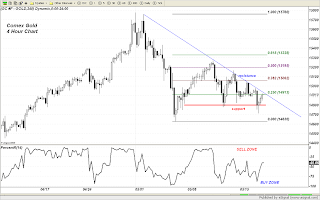 Silver has bounced off of support down near $33 once again and is moving higher at this hour. Thus far it is reinforcing that level as good buying support with selling coming in near $36 - $37. It might very well be carving out a new range. 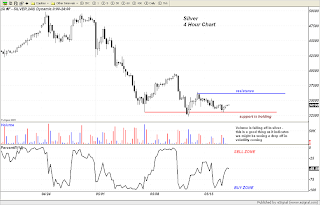 Posted by Trader Dan at 8:00 PM No comments:

Those of you out there who believe that Ron Paul can do no wrong, would be well advised to read his comments proposing that the US sell some of its gold reserves to pay its debts.

Chalk up a hair-brained idea from the Congressman from Texas. While we are at it, why not just sell off the Brooklyn Bridge, Yosemite, Yellowstone and the Everglades. And to think that I actually believed he was very solid on monetary matters.

The Republican party, which by the way has control of the House of Representatives, could simply refuse to raise the debt limit and insist on obtaining strict spending cuts to get the US economic house in order but that would require something that most of our elected representatives do not have. AFter all, all spending bills are required to originate in the House. If the House does not approve the spending bill, the money cannot be spent.

Instead the proposal reeks of the same sort of desperation seen by spendthrifts who end up scouring their old dresser drawers and boxes in their closets looking for family heirlooms and other valuables to go hock at the local pawn shop. The very fact that this idea is actually floating around out there fills me with complete disgust and disdain for the political class. These damn fools spent us all into the toilet and now are considering having to sell what belongs to the US citizenry to cover their rear ends.

Study history - the nation with the most gold will be the nation which holds economic supremacy. Here's a bit of advice for the pols in Washington, including Mr. Paul - stop spending money you do not have. It is not your money that you are spending; it is ours and our children's money.

This is one of the few times that I believe the spokesman for the Obama administration makes sense.


If the US was wise, it would be the first to introduce some sort of gold backing to its currency (after significantly upwardly revaluing the official price at which those holdings are currently valued). That combined with serious attempts to rein in the out of control spending and pro-growth policies would enable the US to begin to grow its economy and create the necessary jobs to supply the desperately needed revenues that the policy makers are looking for.

Of course, if they actually did sell it, India and/or China would gobble it all up in one fell swoop.

Congressman Paul Endorses the Idea, Amid Showdown Between Congress, Administration
By DAVID PIETRUSZA, | May 17, 2011
NEW YORK — The next big question on the federal debt limit could be whether to start selling the government’s holdings of gold at Fort Knox — and at least one presidential contender, Ron Paul, has told The New York Sun he thinks it would be a good move.
Posted by Trader Dan at 4:50 PM 48 comments:

Is a Deflationary Mindset creeping back in?

Take a look at the following four charts and judge for yourself.

First - the overall Commodity Complex as illustrated by the CCI (Continuous Commodity Index). It continues to trade below the support level delineating a double top pattern. Until it climbs back above this level, it tells us that commodities as a sector are currently out of favor with the hedge funds. While the steep, near term uptrend has currently been broken, the longer term uptrend remains solidly intact however.

Translation - while the hedgies are currently disgorging long positions in the commodity sector as a whole, the major trend towards higher commodity prices over the long haul is still very much alive. Short term trend - bearish. Long term trend - bullish. 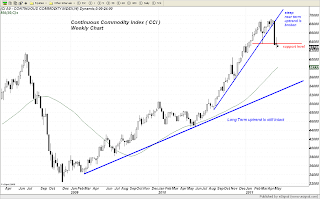 Second - the Long Bond - it has now broken out to the upside and is moving higher dropping yields lower. The long bond in particular is a good gauge of trader expectations of inflation. Bonds are now in a "see no evil, hear no evil, speak no evil" mode when it comes to inflation. This is the exact same thing they did back in 2008 when the carry trade was unwinding and commodities were buckling.

Note that the bonds have moved exactly to the 50 week moving average, a critical resistance level. If they break through this, they are going to head towards the 50% Fibonacci retracement level of the decline that began last year when talk about the next round of Quantitative Easing began surfacing. They then completely broke down as traders correctly feared the inflationary impact of Ben's helicopter drop. This is the reason I suggest that if the equity markets begin to implode as QE2 supposedly comes to an end when the month of June expires, that the FOMC may very well possibly cook up a new QE3 if economic data continues to deteriorate and the payrolls situation does not begin to improve. The economy can only continue to muddle along for so long before cries for the Fed to "Do Something" will surface. 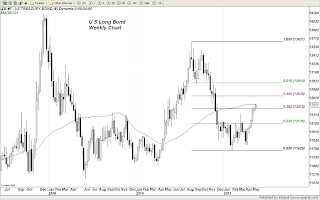 Thirdly - the US Dollar continues to trade above its 50 day moving average. While it has yet to close above tough resistance near 76 on the USDX it is still holding above that major moving average. If it falls back down below this level, it should encourage the risk trades to come back on, at least for a while. That would push commodity prices higher. If it moves higher and takes out 76 on a closing basis it would indicate that a run towards 77 is very likely. Such a thing would feed into further unwinding of the carry trade and would pressure commodities overall. 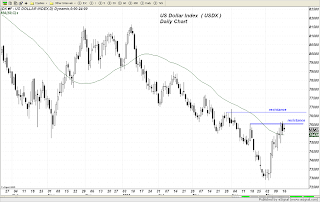 Fourthly and lastly - the S&P 500, which is the best representation of the broader US equity markets. While its daily chart is showing definite signs of weakness, the weekly chart still shows a market in a solid uptrend. This is perhaps the one thing that is keeping the deflationary mindset from becoming firmly entrenched and what is keeping this from becoming a replay of 2008. As long as this market holds the uptrend, weakness in the commodity sector should not become too serious. If this market were to break down on the weekly chart however, we would have to expect more weakness across the commodity sector as a whole, especially if the US Dollar were to break through 77 on the USDX. 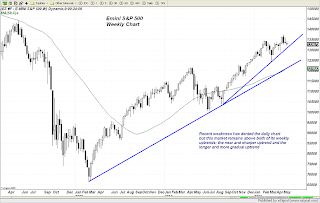 Keep in mind that this is perhaps the worst volatility that we have experienced in some time. Various factors are producing severe crosswinds which are creating instability and confusion in the minds of traders/investors as such attempt to discern the impact of Central Bank action or inaction on the markets. Sovereign debt woes in Euroland have added yet another mixture to this bizarre witches' brew of uncertainty. Inflation fears in the emerging economic powerhouses of China and Brazil add yet another component for those attempting to see through the fog and ascertain the status of the overall global economy. Energy prices have soared fanning the fears of inflation only to come crashing back to earth once traders feared their dampening impact on global growth. Now that these same energy prices have dropped so sharply, does this work to improve growth prospects as the "energy tax" impact dissipates? Or is this a sign of deflation creeping back in? That same questions could be asked over food prices in general.

With all of these factors many traders are just saying, "enough" and are heading to the sidelines. That works to create even more volatility as it tends to exaggerate or amplify price swings in the markets on account of the reduced liquidity.

Expect the unexpected and you will be okay. Look at the longer term charts to keep your perspective and try not to be too distracted by the day to day gyrations. Respect the technicals on the charts as our modern markets are governed by these, whether we like it or not. If you do, you will come through this perhaps a bit bloodied but you will come through it as a survivor. Be foolish enough to attempt to impose your will on the market, and you will be crushed and left for dead on the trading floor. Remember that the markets could care less what any of us think or say about them. They are what they are. Professionals know this; Novices will learn this soon enough, much to their own chagrin and impoverishment.
Posted by Trader Dan at 7:58 AM 13 comments: