The plunge in the stock indices in today's trading has wiped out the entirety of paper gains for the year. There are several things I wish to note about this.

The first is that the so-called "debt ceiling agreement" was supposed to be friendly towards stocks. Remember the soaring indices in Sunday evening trade as the news broke that the agreement had been reached. The market has put all that behind it and is now focusing on the pathetic growth rate in the US economy and the fact that lawmakers and the administration will now proceed to saddle this generation of Americans and the next with even more debt. That debt weighs like an anchor on future economic growth and this is not being lost on traders/investors. As I said in a previous post - only in modern day America could a bunch of hapless politicians congratulate themselves for sinking their nation and their countrymen deeper into a morass of indebtedness. Words cannot express my contempt and disdain for this bunch of pitiful "statesmen". They make Nero look like a genuine patriot by comparison. He at least did something constructive while his city burned. He played his fiddle. Our jokers played us instead.

Secondly - I made a point a while back that the one relatively bright spot for consumers was that even though gasoline prices were soaring higher and still remain stubbornly high, even though food prices continue to trek upwards and consumers leave the grocery stores with fewer goods in their bags for the same amount of money spent, even though medical costs continue to rocket higher, even though their home values continue to sink lower leaving more and more mortgages underwater, even though the employment situation reeks to high heaven, at least, at least, their 401K's and retirement plans were a bit in the black for the year. That has now evaporated like the morning dew. Can you even imagine what the next Consumer Confidence numbers are going to look like?

Friends and readers - this week will be one for the history books in my opinion as it will mark the beginning of the steady decline of the US economic might unless there is a drastic, and I do mean "drastic" change at the ballot box next year. It might even possibly be too late for even that to do any good at this point as the mathematics is now working against us all.

The markets are said to illustrate the combined wisdom of a host of individual traders/investors/players, who survey the current scene and then based on that survey, make decisions accordingly. Based on that alone the markets are saying that looking ahead, the environment for stocks in general is rapidly deteriorating and that we are heading back into Recession.

All eyes will then turn to the Fed for some further round of QE although I doubt it will be called that for political reasons. Either way, should that indeed happen, the floor under the Dollar will collapse. 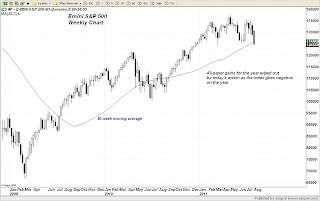 Uptrending Channel is beginning to steepen for Gold

Since late 2008, gold has been rising in a strong and steady fashion within the confines of a channel that I have marked out on the weekly price chart. As mentioned previously, its rise has been orderly and solid unlike silver which burned itself out by rising too quickly at one point earlier this year and is just now attempting to re-establish a solid uptrend.

Since the year 2011 has begun, a new and steeper price channel appears to be forming as the fundamental factors that have driven the metal onto new record highs show no sign of ameliorationg; if anything they are growing worse.

These three factors are:

(1.) Sovereign debt woes out of the Eurozone
(2.) Raging inflation across China and other parts of Asia
(3.)  Anemic economic growth in the US guaranteeing accomodative monetary policy for the foreseeable future

One can add to this a 4th factor which is the enormous amount of indebtedness being heaped upon the citizens of the US by politicians which is sinking the nation into an inescapable mire of perpetual debt slavery and has now set the stage for an inevitable downgrade of US debt worthiness. It seems to me that this recent travesty of a spectacle, in which lawmakers actually cheered plunging the nation further into bondage has brought home the gravity of the situation to an increasing number of citizens/investors.

In the West this has resulted in a loss of confidence in the monetary authorities and political leaders which has resulted in surging demand for gold as a safe haven and vehicle to protect the earning power of accumulated wealth. In the East it has led to gold buying as a hedge against soaring food and energy costs. All of this has now come together and is feeding the bullish sentiment for the metal. 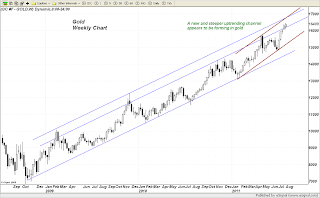 Gold has been able to better the price cap near the $1625 level and is now in the process of attacking the $1650, the level which my good friend Jim Sinclair long predicted it would approach. Should it take out this level, it looks to be on a path to $1680 based on what I can from this newer channel. Downside support is initially at yesterday's low of $1608 followed by $1600.

Aiding its upward progress in US Dollar terms is the fact that it has once again scored new all time highs priced in both the Euro and the British Pound. 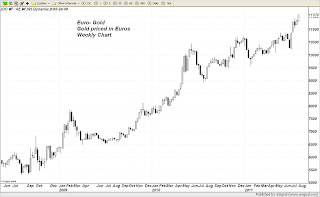 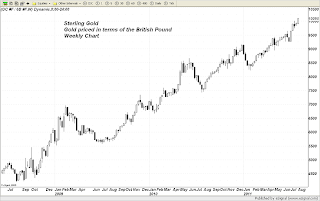 The bond market is acting as if it has totally dismissed any rating agency potential downgrades. The Long bond continues moving vertically shoving rates lower putting a huge smile on the face of Federal Reserve officials and other assorted policy makers who are gleefuly watching the fools who would entrust their wealth to paper IOU's of the federal government. I do not care whether US bonds are considered safe compared to the bonds of many EU member countries' or not - buying Treasuries is a fool's game especially when the US government is spitting them out faster than a Persian cat can spit out hairballs. They are utterly and completely worthless. Even China is sick to death of the things.
China loses trust in US economic stewardship
Asian giant to say no to dollar dominance
By Stephen S. Roach
Published: 00:00 July 31, 2011
New Haven: The Chinese have long admired America's economic dynamism. But they have lost confidence in America's government and its dysfunctional economic stewardship. That message came through loud and clear in my recent travels to Beijing, Shanghai, Chongqing, and Hong Kong. 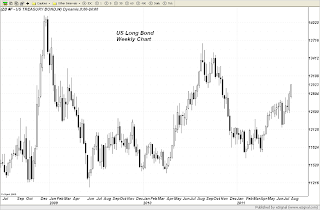 The S&P 500 has returned back down into a region from which it will have to soon reverse or else it will experience a rather rude sell off. If we get another rotten payrolls number, it is difficult to see how it is not going to break below 1250 this time. 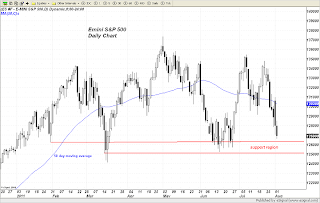 I could not resist posting this story as an example of the utter stupidity of unaccountable and unelectable meddling bureaucrats who are destroying the country that I grew up in by their sheer mindlessness and preening sense of self-importance. I have long suspected that many bureaucrats and officials who pull these sorts of stunts have deep psychological issues that prevent their minds from functioning in a rational manner.

FREDERICKSBURG, Va. (WUSA) -- Eleven-year-old aspiring veterinarian, Skylar Capo, sprang into action the second she learned that a baby woodpecker in her Dad's backyard was about to be eaten by the family cat.
"I've just always loved animals," said Skylar Capo. "I couldn't stand to watch it be eaten.