Very early this morning, gold shot up to another all time record high above the technically significant resistance level near $1680 as sovereign debt fears coming out of the Euro Zone intensified with the worsening news. It did not take long however as trading moved further into the New York session for gold to drop sharply lower as the US equity markets began imploding. The Dollar soared over 100 points, the Euro fell out of bed and the crude oil market was shellacked as investor after investor all began heading to the sidelines and running out of nearly everything out there except for US Treasuries.

Further intensifying the fear trade was news that a large bank (Bank of New Yokr Mellon) was actually charging customers a fee for putting cash INTO their bank!  If that was not revealing, nothing was. It showed how nervous investors are becoming and how desperate they are to find a safe haven to park their wealth. THis news helped to further feed into the buying frenzy in the Treasury markets as investors basically shrugged their shoulders as if saying, "What the heck, if they are going to charge me a fee to put money in their bank, I might as well just buy Treasuries instead".

It occurs to me that the overnight intervention by the Japanese monetary authorities was extremely bullish for gold as it was further evidence of the currency debasement policy proliferation that we have been witnessing. We have seen the Swiss also playing that game along with the Brazilians  which is the reason that gold has been going on to make one record high after another across a variety of major currency terms. However, all of this was outweighed by the sheer volume of money flows out of the markets in general. Many are attempting to come up with a new strategy to deal with the rapidly changing economic paradigm and prefer to just get out of their trades while they weigh their options. Others are just selling in order to raise cash to meet a plethora of margin calls. There will be more than a few utterly exhausted margin clerks before the closing bells ring on the various markets.

The Euro in particular and the commodity currencies in general were all whalloped today as traders are now coming around to the view that the next move by the ECB in regards to interest rates will be LOWER and not higher. That has led to a general theme of Euro selling along with Dollar buying. All of this mess really started in Europe which it now appears is dealing with its own version of Lehman Brothers and the liquidity crisis that erupted when that institution failed back in the summer of 2008. Their problem is related to their big banks however in the sense of the exposure that these entities have to the sovereign bonds of some of the major countries comprising the Euro Zone. Credit lock ups are what the real fear is.

The commodity currencies were crashed along with the CRB and the CCI (more on those indices later).

One of the few bright spots I can see as far as the consumer goes is that UNLEADED GASOLINE crashed through its recent low today which should eventually provide some relief at least at the gas pump for beleagured consumers. A nice $0.40 drop in the wholesale price will perhaps free up a bit of the little disposable income that consumers have left in their wallets. 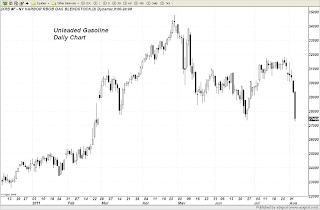 There have been a large number of references back to the summer of 2008 today as the deflation trade dominated the markets at that time. This is being reflected in the mining shares once again which are absolutely horrendous today as the HUI is currently down over 5% as I write this while the XAU is down over 6%. Both have violated their 50 day moving averages and are back under their 100 day moving averages as well.  There is some support on the price chart of the HUI near the 520 level and 190 on the XAU. Whether or not those hold is unclear at the given moment especially if this fear trade were to intensify further. An awful lot of traders have already thrown in the towel today based on the massive move lower across so many markets so perhaps the bulk of the selling is over. I am simply not sure but what I find rather remarkable is how quickly the "Buy the Dip" mentality in the broader equity markets completely evaporated today. All that happened in the mining sector is that the gold shares became even more undervalued compared to gold than they were before the day started. We will keep watching to see at what level enough value based buyers emerge in the shares to outweigh the hedge fund algorithm related selling that continues in association with that ratio spread trade of theirs. 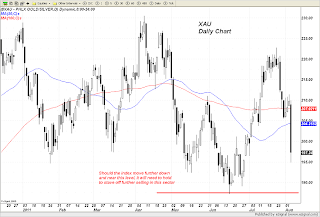 The S&P 500 has smashed through downside support moving below psychological round number support at 1200. If you look at the weekly chart, you can also see that it is negative for the year and is sitting on the 25% Fibonacci Retracement Level for the rally from the early 2009 low to its recent top.  It will need to recapture 1200 quickly to stem the bleeding somewhat or else we will see an eventual move towards the 38.2% level closer to 1107. 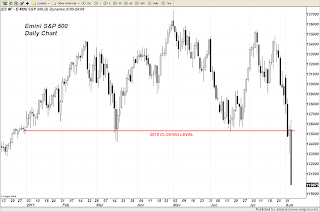 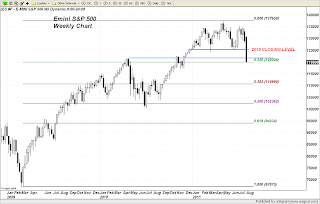 Back to gold however - part of the reason it was hit so hard at one point in the trading session had to do with unsubstantiated rumors that were floating around that the CME Group was going to be hiking margin requirements on their gold futures contracts. Traders hit the gold market so hard with selling on that rumor that they knocked the price of gold down nearly $40 off its best level of the session. Later on the CME felt the need to address that and denied the rumor was true. That denial led to a counter rally in the gold market which came nicely off its lows only to run into another wall of selling once the neighboring silver market puked along with the downward acceleration in the US stock markets. While the near term technical price charts look a bit toppy on gold as a result of the margin related selling, considering the carnage across so many of the commodity markets, it was down less than 1%. I want to see how it performs overnight and into early tomorrow morning when we get the payrolls number from the US pencil pushers before I get a better sense of where it might be heading next in the short term. One has to respect the technicals in today's markets as that is what the computer algorithms are all based on and right now we are looking at a short term negative technical pattern on the gold chart. If Asian comes into to buy overnight or if we see additional gold buying out of Europe when it opens tomorrow, then there is a good chance that today's action will be negated. For the time being however, one cannot ignore the chart pattern so be careful. I will feel a bit more confident for the short term prospects of gold should it be able to recapture the $1,665 level on a closing basis. 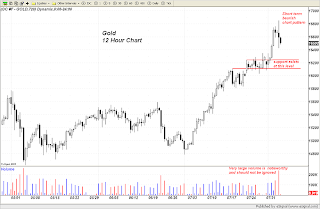 Keep in mind that I am speaking as a trader looking at a short term price chart. Longer term I believe many investors are looking for a dip in the gold price to secure more of the metal. The entire problem in the markets right now is that investors world wide, but particularly investors putting money into the Western economies, have LOST CONFIDENCE in the monetary authorities of those nations and in their political leaders. In effect, the markets have voted and that vote says, "WE DO NOT TRUST THEM TO BE ABLE TO PROPERLY DEAL WITH THE ROOT CAUSES OF THE PROBLEMS THAT ARE AFFLICTING THE NATION". Gold in that sense is the "ANTI-GOVERNMENT" vote as there is no government behind the metal. That will keep buyers interested in gold even in the midst of a money flow issue.
Silver was mauled without mercy as it met with the fate of copper. This is to be expected during times of risk aversion. For all the silver bulls out there, please understand this basic principle - Silver will not outperform gold during a period of risk aversion. Period - Comex silver stocks do not matter. All that matters is that risk trades get yanked off and silver gets hit harder than gold because even though it has an historic role as a safe haven metal, it cannot shed its industrial metal role completely during such times. The Gold/Silver ratio will therefore move in the favor of gold during periods of risk aversion when fear trades are the rule. When the risk trades go back on and traders feel very comfortable taking risk, then silver will outperform gold to the upside. 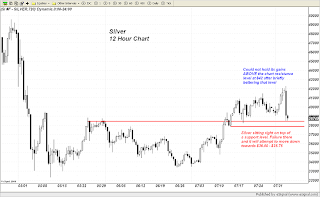 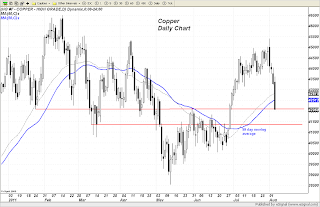 All our eyes will now turn to that payrolls number tomorrow morning to see where things go next.
In the meantime, I cannot tell you how many times I heard the talking heads using the words “OVERSOLD” today. Funny how we rarely if ever see these same financial anchors use the term, “OVEROUGHT”. One can almost sense just how badly they want the stock market to stop going down. If we get a larger than expected payrolls number tomorrow, they will probably get their wish.
Posted by Trader Dan at 1:56 PM 6 comments: