I have to keep my comments brief today as it is time for Halloween!

Looks like precious metals owners got a back of tricks today instead of treats. The culprit was the intervention by the Japanese monetary authorities who hit the Yen with a barrage of selling and sent the markets into a tizzy. The subsequent rally in the US Dollar then had the mindless hedgies dumping everything they bought late last week as equities were trashed along with the commodity sector in general.

Copper and silver were both sold off and gold went along for the ride to the downside.

If some of you might have noticed the Treasury bond had a gargantuan 3 point rally after just suffering a three point sell off last Thursday. How's that for ridiculously insane price action. The entire business cycle, just completely changed over the course of the last 4 days. Tomorrow it could merely take 24 hours to re-reverse the business cycle again. This is what computerized trading algorithms have created. And to think this is somehow supposed to be the "smoothly functioning price discovery mechanism".

What happened in the Treasury markets is that the Japanese came into the Forex markets and bought a boatload and then some of US Dollars and had to do something with all those worthless slips of paper so they turned around and bought up the equivalent amount of intervention's worth of worthless Treasuries.

No doubt the officials at the Federal Reserve are glad to see the Japanese doing their Operation Twist for them but I suspect that they are not particularly happy about seeing the Dollar moving higher!

We'll see where the dips buyers surface once again, particularly as Asia moves further into its session.

Happy Halloween to all! 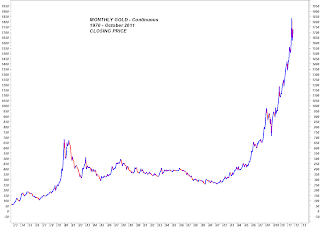 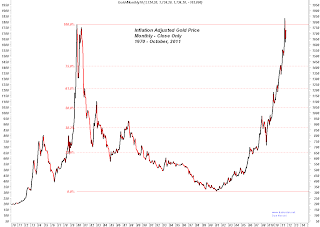 Bank of Japan Intervention in Yen is doomed to Fail

The Bank of Japan stepped into the Forex markets overnight in an attempt to punish the impertinent speculators who have dared to nullify their former intervention efforts undertaken back earlier this year when the nation suffered the onslaught of the earthquake/tsunami.
Note the previous intervention, which I might add was a VERY RARE example of COORDINATED CENTRAL BANK EFFORTS involving the BOJ, the ECB and the FED. If intervention is going to be effective, it will generally need to be coordinated, sustained and have an eventual fundamental backing. Without those factors, it always ends up being a gigantic waste of money. 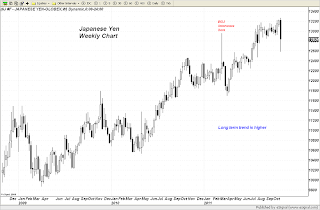 Note that even this coordinated intervention failed to stem the advance of the Yen. Now are we to believe that the Lone Ranger effort by the Bank of Japan this time around is going to be successful? Hardly. They have bought a bit of time but all that will happen is that speculators will use the intervention to step in on the buy side of the Yen and get it at a lower level.
In the process of intervening however, the Bank of Japan is devaluing the Yen when measured against Gold. Gold still remains a store of value protecting those who own it against the depradations of their own monetary authorities. 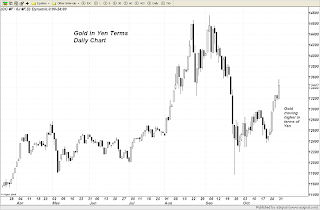