If one goes back to the beginning of July of this year, you can see that for the next two months, the mining shares were outperforming the broader equity markets as a whole.

Once September rolled around, the shares gave back their gains against the broader market and severely underperformed. With today's strong surge higher, we might be seeing the reversal of this recent lagging in terms of performance.

Much depends on the willingness of traders to see gold and silver as "SAFE HAVENS" and not as part of the broader risk trade. The reason the mining shares are doing so well in today's session, especially with the broad based selling across the general equity world, is that traders/investors have re-awakened to both gold and silver as safe havens in the midst of some very palpable fears about the shaky European debt crisis. As money flows have returned to those precious metals, flows are also coming into the mining shares which will of course benefit if the metals continue to move higher.

One day a trend does not make but this is such a drastic departure from recent behavior that it must be noted and also closely watched to see if this is the start of something significant.

As a side note - if the chart pattern is moving higher, the HUI is outperforming the broader US equity markets. The opposite is true if the pattern is moving lower. Note the sharp surge higher in this ratio and the breach of the downtrend. 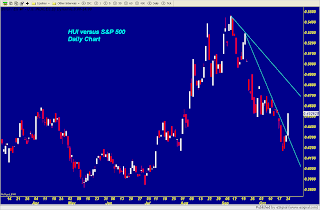 Gold bulls finally managed to beat back the line of defense erected by the perma shorts at the Comex in today's session as safe haven buying came into gold from all quarters early in the session and continued to build as it wore on. The technical breakout above resistance also brought in both short covering and new momentum based buying.

Volume on the upside move has been very good which is generally regarded as confirmation to the validity of the breakout.

The next technical target lies near the $1720 level.

Downside support now moves up towards $1680 with much better support near $1650.

Helping confirm the move is the surge in both the mining shares as evidenced by the HUI and the upside breakout above $32.50 in Silver. 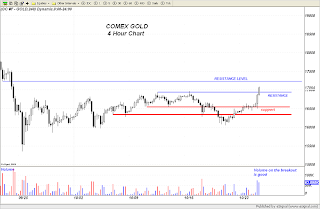 Note on the silver chart that the market is  currently up against the 50% retracement level of the most recent leg down. Clearing this should allow it push first towards $34 and then up against the $35.15 - $35.25 level.

Downside support levels are first near $31 and then back down towards $30. 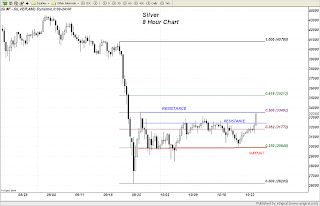 Both of these metals have been moving in lockstep recently as risk trades were either jammed on or taken off. Silver has been trading like an industrial metal during such times. Today it is moving like a safe haven metal. Very interesting developments to say the least.

In the process it is now trading solidly above critical resistance near the $32.50 level. If it can hold these gains, it will be on target for a shot towards $34.
Posted by Trader Dan at 9:29 AM No comments:

In a departure from recent price action in which it has been acting more like a "risk" asset rather than a safe haven asset, gold is moving higher alongside of both the US Dollar and the US Treasury market. It appears that traders are becoming increasingly "jittery" over developments in Europe concering the bank recapitalization plan and the Stability Mechanism. Safe havens flows are definitely returning to gold based on what we are witnessing today.

Thus far the volume has been very strong on the breakout above key resistance at the $1680 level with the market challenging overhead psychological resistance at the $1700 level. If gold can put on a handle of "17", it will get the attention of money that has been sitting on the sidelines as well as putting some further pressure on shorts.

I will get a chart up a bit later towards the end of the session today as I want to see how it does for another couple of hours.
Posted by Trader Dan at 8:55 AM 1 comment: