The strength in the US Dollar has mainly been coming from investors fleeing Europe leading to an outflow from the Eurozone plus Japanese bond investment money that is in search of higher yields. Quite frankly, in the search for yield in a NEAR ZERO interest rate environment, global investors are throwing caution and any reservations that they may or may not have out of the proverbial window and rushing into the US equity markets in anticipation of further ONCE IN A LIFETIME TYPE GAINS.

In other words, the Central Banks have unleashed a speculative frenzy for stocks which is creating a massive equity markets bubble, especially here in the US. As money flows out of various portions of the globe looking for a home in US stock markets, that money must be EXCHANGED for US Dollar with which to buy US stocks. The result - the Dollar is surging higher while the Yen and Euro, along with the other majors, are dropping lower. In other words, foreign money flows are driving the US Dollar higher (this is in spite of the clearly and visibly dysfunctional US government and corruption currently enveloping it).

I expect this to continue until something rattles the cages of the equity bulls. What that might be or when it might occur is anyone's guess at this point. Manias of this nature can continue well past the point of sanity. When they end; they end in a blaze however.

While it continues on, the US Dollar keeps getting pushed past various chart resistance levels. I have noted this week's push into a band of resistance starting near the 84 level and extending up to the session high of today near 84.25. IF, and it is unclear yet, the Dollar closes the week ABOVE this level, it has one more obstacle to clear before it sets up technically for a run all the way back to the double top formation at 89. That last level of resistance is the 85 mark. 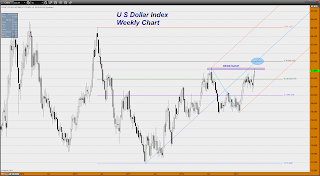 It is the confluence of the pitchfork and the 75% Fibonacci Retracement level from the doble top back in 2010 and the low in the summer of 2011 near 73. From a strict technical analysis perspective and based on Fibonacci retracement theory, a market that pushes through the 75% retracement level,can be expected to retrace the entirety of the preceding price move. Translation - back to 89 the Dollar goes.

I want to add here that this rally in the Dollar is that which has been undercutting the entirety of the commodity complex. Hedge fund algorithms are mechanically selling across the sector. Gold is being included in that. While physical market demand remains firm, sentiment towards it in the West remains miserable. It is all about YIELD, YIELD, and YIELD. Gold throws off no yield and stocks do. That is what this is all about right now.
Posted by Trader Dan at 4:44 PM 31 comments:

Sell Stops Cascade Gold Down Below $1400

Bears have been salivating at reaching downside sell stops for a while now but had been stymied by strong physical buying of the metal which had kept prices supported. With the US Dollar continuing to strengthen, and with commodities in general seeing strong selling pressure, they finally got their wish in today's trading session.

Price fell through some initial support near the $1420 level which had held the market for the last few sessions but once that gave way, downside pressure intensified until bears took it down to near $1410. Just below that they hit their jackpot and reached the sell stops. It was those stops going off that knocked price through the psychological floor at $1400. That allowed another $10+ fall in the price of gold where some short covering and bottom hunting surfaced right below $1390.

I have noted the next level of chart support for gold. It is currently just beneath today's session low of $1389 coming in closer to the $1385 level. If that does not attract sufficient buying, price will fall down into the rectangle I have noted on the chart somewhere in the vicinity of $1375 - $1365.

I want to note here yet again how volume continues to increase during these downdrafts. This is not a bullish pattern. Bears are firmly in control until we see the volume shift along with the price action. 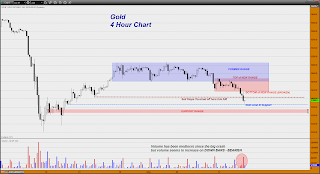 With the mining shares completely collapsing, there is really no other catalyst for bears to aggressively cover their positions right now other than booking a few profits. Like it or not, approve of it or not, the US Dollar is the strongest game in town right now as investors globally see the US as the best place to stash money. It is a pity that the Treasury International Capital Flows data is so dated by the time we get it but I would wager good money that the component breaking out the foreign money inflows into equities is soaring.

Either way, the strong Dollar is keeping gold buying in check. One thing I might note here - that same strong dollar is now beginning to impact US exports of agricultural goods.

It's funny in a perverse sort of way that the Bank of Japan, which is printing about $74 billion each month in an effort to stave off deflation is seeing that extra supply of Yen drop its currency into an abyss while at the same time, the Federal Reserve is printing an equivalent value of some $85 billion each and every month while its currency soars blissfully into the upper levels of the atmosphere. You tell me how to mentally wrap ones mind around this sort of perverseness. All I know is that Bernanke and Friends have concocted a new elixir and discovered the Holy Grail of Permanent, Pain Free, Prosperity. We really are seeing the very concept of "MONEY" redefined right before our eyes!