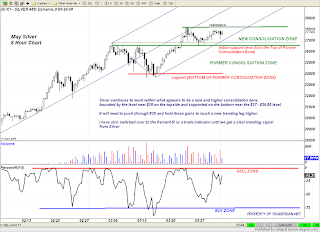 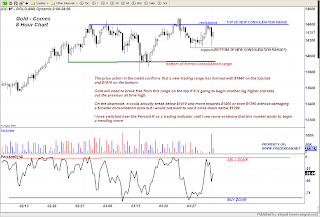 Remarks from analysts this morning about Federal Reserve Bank of New York President William Dudley's dovish comments on the state of the US economy mostly miss the mark in my view.

Dudley's words stood out in stark contrast to those by other Fed officials last week and this week who have been sounding a hawkish tone and chattering about ending QE. To paraphrase some of his comments: The US economic recovery is 'still tenuous' and 'far from the mark' of the Central Bank's goals of full employment and price stability, according to a report carried by Bloomberg this AM.

Dudley remarked that we must not be overly optimistic about the growth outlook".

Almost as if on cue, the bond market sharply reversed course after selling off this morning on the payrolls number. The Dollar simultaneously began slipping off its session highs.

Analysts were quick to chime in stating that the comments reflect the confusion and lack of consensus within the Fed. I do not think so to be perfectly honest for the reason that I have stated previously here at this site.

If the Fed starts sounding hawkish in an attempt to keep the Dollar from collapsing through a major chart support level near 75 on the USDX, they cannot prevent the long bond from breaking down technically and thus commence a rise in long term interest rates which will bury what might be any signs of life in the comatose housing market.

If they sound too dovish then the Dollar will come under renewed selling pressure potentially setting up a serious move lower in the greenback as it remains sitting perilously just above technical price chart support.

The Fed is attempting to keep both the Dollar from collapsing lower (they do want a sustained and gradual move lower - not a crash) and the long bond from collapsing. This is the reason for the conflicting signals being put out.

The idea is to keep enough confusion and uncertainty in the market to prevent speculators from getting too aggressive either way. Once the specs become convinced the Fed might move to end QE, the bond market will be massacred.
If the market becomes convinced that the Fed will not only keep QE2 going but engage in a QE3, then the Dollar will be obliterated.

The Fed created its own box and now they can deal with it. One thing is certain - they are not going to be able to have their cake and eat it too. What they will eventually have to come to grips with is that they are going to either have to sacrifice the Dollar or sacrifice the long bond.
Posted by Trader Dan at 9:26 AM 7 comments:

Santa Claus is coming to a Foreign Bank near you

Kudos to Bloomberg for pursuing this issue and getting to the bottom of the Federal Reserve's "Excellent Adventures around the Globe" with American taxpayer money.

Note the part that I highlighted in blue.

Ron Paul's comments are more than likely striking a chord in the hearts of those who are as outraged over this as I am.

The irony in all this is that the US is effectively bankrupt having a federal government debt burden over $14 trillion and rising with politicians unable to even cut a measley $60 billion without the fools on the left screaming "extremism" and yet here we are loaning money to other foreign banks.

Let's see if I have this right - the Fed prints the money into existence and then the US government goes a begging into the world by issuing gazillions in Treasuries and then turns around and loans that to other banks.

"Oh don't worry", they tell us, "the loans are being repaid".

That's terrific. When I see the US reducing its own external liabilities then I won't worry. Meanwhile the US plunges deeper and deeper in the debt abyss.

By Bradley Keoun and Craig Torres - Mar 31, 2011 10:19 PM PT
U.S. Federal Reserve Chairman Ben S. Bernanke’s two-year fight to shield crisis-squeezed banks from the stigma of revealing their public loans protected a lender to local governments in Belgium, a Japanese fishing-cooperative financier and a company part-owned by the Central Bank of Libya.

Dexia SA (DEXB), based in Brussels and Paris, borrowed as much as $33.5 billion through its New York branch from the Fed’s “discount window” lending program, according to Fed documents released yesterday in response to a Freedom of Information Act request. Dublin-based Depfa Bank Plc, taken over in 2007 by a German real-estate lender later seized by the German government, drew $24.5 billion.

The biggest borrowers from the 97-year-old discount window as the program reached its crisis-era peak were foreign banks, accounting for at least 70 percent of the $110.7 billion borrowed during the week in October 2008 when use of the program surged to a record. The disclosures may stoke a reexamination of the risks posed to U.S. taxpayers by the central bank’s role in global financial markets.

You can read the entire story here if you want to further ruin your day.
http://www.bloomberg.com/news/2011-04-01/foreign-banks-tapped-fed-s-lifeline-most-as-bernanke-kept-borrowers-secret.html

Actually they did no such thing but with the reports coming fast and furious out of Bloomberg this morning about Federal Reserve lendings to foreign banks, I could not resist the fictitious headline.

It is very rare that I agree with anything said by the Socialist Senator from the state of Vermont, but in this case I think he is echoing the sentiment many American citizens are expressing after learning of Mr. Bernanke and company's largesse with the what is effectively the property of the US taxpayer.

Maybe this is the new policy - Loan 'em money first - get repaid and then bomb 'em next.

By Donal Griffin and Bob Ivry - Mar 31, 2011 9:08 PM PT
Arab Banking Corp., the lender part- owned by the Central Bank of Libya, used a New York branch to get 73 loans from the U.S. Federal Reserve in the 18 months after Lehman Brothers Holdings Inc. collapsed.
The bank, then 29 percent-owned by the Libyan state, had aggregate borrowings in that period of $35 billion -- while the largest single loan amount outstanding was $1.2 billion in July 2009, according to Fed data released yesterday. In October 2008, when lending to financial institutions by the central bank’s so- called discount window peaked at $111 billion, Arab Banking took repeated loans totaling more than $2 billion. ......

“It is incomprehensible to me that while creditworthy small businesses in Vermont and throughout the country could not receive affordable loans, the Federal Reserve was providing tens of billions of dollars in credit to a bank that is substantially owned by the Central Bank of Libya,” Senator Bernard Sanders of Vermont, an independent who caucuses with Democrats, wrote in a letter to Fed and U.S. officials.
http://www.bloomberg.com/news/2011-03-31/libya-owned-arab-banking-corp-drew-at-least-5-billion-from-fed-in-crisis.html
Posted by Trader Dan at 7:20 AM 4 comments: