Gold was able to close the week out on a very strong note, although some traders did decide to cash in some profits ahead of the weekend, after getting a nice run of some $65 off of last week's close as of Thursday's peak price. Even in spite of the light round of profit taking, gold still managed to put in a very solid WEEKLY close surrendering only about $15 off its best level of the week and closing within striking range of $1800, the top of the heavy resistance zone noted on the price chart. 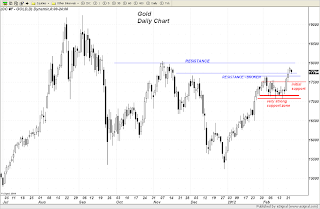 Take a look at the weekly chart shown below for an intermediate term view of the market. Note how the chart resistance near the $1800 level can clearly be seen. Gold did not challenge this level this week but from a technical standpoint, it does stand a very good chance of so doing next week.
If you notice the pattern I have marked as a "bullish pennant" or a "bullish flag" you will see the flagpole and the pennant or actual flag. These patterns occur often enough that they should be noted as they generally portend a strong move in the direction of the flagpole which can be used as a gauge of where price might be expected to run in the near future. The length of this flagpole which extends from the bottom near $1535 to the top of the pole coming in near 1765 is $230. 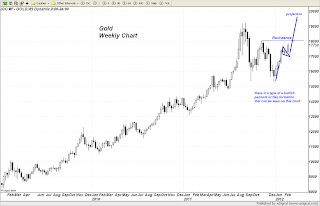 Once you get a brief period of consolidation, which is exactly what we have had the last three weeks prior to this one just completed, a fresh upside move which takes out the HIGH OF THE FLAGPOLE then gives us the potential for a move of some $230 higher. Some technicians will add this to the top of the flagpole giving a projection of $1995. Others whom are a bit more conservative (put me in that category) will add the length of the flagpole to the BREAKOUT POINT of the downtrending line forming the top of the flag. That price point came in near $1725 which yields a projection of $1955. Either way it gives us gold at a brand new all time high.
An ideal technical price action will be, in the event of any subsequent price reaction lower, to see gold find buying coming in along the line that marks the top of the flag which then causes the price to rebound and begin moving higher. It is just another way of demonstrating that buyers are eager to buy dips and see value at this new, higher level. They are not willing to risk sitting on the sidelines in the hope of purchasing the metal even lower. If you do break below the bottom of the flag itself, the formation will generally be void although that does not mean that price has peaked. It merely means that the bullish flag formation projection is not going to be reliable.
For a bit of a longer-term perspective, I am including a monthly chart of the metal. Note carefully the clearly defined uptrending channel that can be seen going back into the bottom in gold in late 2008, when the Quantitative Easing programs were first announced. Gold has tracked within this channel very closely with the brief one month exception when it got a bit overheated and frothy later last year. That sharp parabolic rise was met with selling that corrected the overbought reading and took price back within the channel.

Here is the significant point to make -this month's price action has thus far taken the price to the top of this channel once again. I think it is no coincidence that we did see some selling therefore arise late Thursday and into Friday's session particularly as gold approached the $1800 level which just so happens to be very close to the top of this channel. It is both a logical and a technical chart selling point. 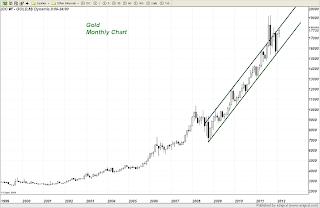 If, and this is a big "IF", the metal pushes through the top of this channel and closes the month above it, odds would then favor an acceleration of the trend higher and perhaps a new and steeper uptrending price channel being formed. I would especially want to see a second consecutive monthly close ABOVE this old channel coming at the end of March to confirm this however to avoid another one month wonder.
If we were to get that, I do not think it would be very long before we revisit the all time highs above $1900.

What this would be telling us fundamentally is that gold is now convinced beyond all shadow of a doubt that the near world-wide currency debauchment by the Central Banks is not going unnoticed.
That environment, which is simply another way of stating NEAR-ZERO interest rate policy, is generating genuine fears of currency debasement and the subsequent strong inflationary impact that inevitably arises from such a policy.

We would also get a confirmation by a strongly rising Continuous Commodity Index.
Posted by Trader Dan at 1:37 PM 6 comments: