Continuous Commodity Index back above its recently broken support level

Some of the readers might recall seeing the chart of the CCI that I posted not long ago detailing my concerns as to whether a deflationary mindset was creeping back into the markets. That was based on the pattern of the weekly CCI chart which showed a breakdown of the support level thereby forming a double top in the process.

Today, the risk trades were back in force with the US equity markets roaring higher once again. That had most commodity markets seeing hedge fund money flowing in after it all flowed out for the past two weeks.

In the process, the CCI was able to move back above the broken support level shown on the chart which set off the double top alarm bells. This is a significant development as it shows that the bulls are not yet ready to throw in the towel on the commodity sector as a viable asset class. Here is the key however - today's move was impressive but there are still two days remaining in the trading week.

How this index closes Friday afternoon will be a very big deal. If it can hold this level which comes in near 640 and stay above that, preferably moving above the previous week's high at 650 while so doing, it would give us the very real possibility that a bear trap was sprung and this index is going to try pushing back towards 660 for starters. That would immensely benefit both gold and silver bulls.

Should the index fail and drop back below 640 for the week on the close, the bears would have dodged a bullet and the bulls will be back on defense. 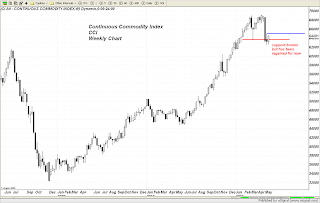 Obviously we are all back to trading risk or not risk. "Wax on Daniel San; Wax off Daniel San". If Risk is back on, then the index will move higher. If not, it will move below support once again.

By the way, the long bond chart shows the return of risk trades in today's session with a huge downside move forming a bearish engulfing pattern on the daily chart. Whether that holds is anyone's guess. As manic as the hedge funds are, they could stage an outside day reversal to the upside tomorrow. However, after having moved nearly vertical for the past 5 weeks, the bonds are overbought technically giving traders a reason to book profits based off the bearish chart signal today.

I would feel a bit more confident about a breakdown in the bonds if we get some followthrough selling in tomorrow's (Thursday) session. They are still above the 10 day moving average and need to at least take that out to get the bulls wavering a bit further. Also note that the bonds have completed a move to the 50% Fibonacci retracement level from the decline off the late October high where they promptly failed. The bulls will need some ammunition to prevent some bears from getting a bit more confident. 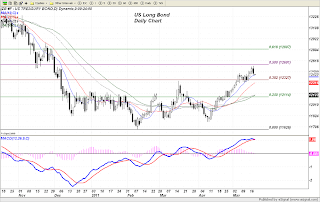 Gold continues its range trade and has now moved to the top of that range between $1500 and $1480 - $1470. A strong push past $1500 would be a psychological boost to the gold bulls and would unnerve a few of the weaker shorts as well. We could expect to see their short covering provide enough fuel to take it to $1510 should that occur.

Downside moves towards $1480 - $1470 continue to attract buying and with the Dollar fading from near the 76 level again, that buying should continue. I would not expect $1470 to give way unless the USDX were to be able to push towards 76.50. 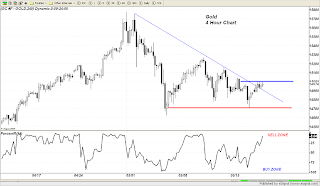 Posted by Trader Dan at 7:31 PM No comments:

Must be a Slow Day at the FDA

Apparently the Food and Drug Administration has nothing better to do with their time than hunt down those crafty food terrorists also known as the Amish.

I am shocked, simply shocked, that raw, unpasteurized milk was being sold to willing buyers. It is just a matter of time before the names of these devious dairy farmers appear on the no-fly list. Then again, maybe the feds will come up with a "no horse buggy ride" list instead.

A yearlong sting operation, including aliases, a 5 a.m. surprise inspection and surreptitious purchases from an Amish farm in Pennsylvania, culminated in the federal government announcing this week that it has gone to court to stop Rainbow Acres Farm from selling its contraband to willing customers in the Washington area.

You can read the entire story here: