Gold Looking for a Catalyst

With a growing number of pundits calling the 12 year bull market in gold as coming to an end, the large money flows that are necessary to drive gold higher have recently been lacking. If you look at the S&P 500 and look at the gold chart, it is not hard to see where the bulk of investment flows have been going; namely equities. 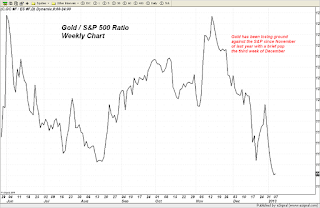 This fits with the theme being sounded by GET-TV that the bull market in stocks is proof that the global economy is recovering. Again, please no nastygrams on this; I am merely repeating what the pundit class that regularly appear on TV are saying.

I find it rather amazing that very few seem to be the least bit concerned about the growth in the size of government indebtedness. Then again, as I have been saying a lot lately, hot money has nothing to do with long term views; it is tied to near term thinking and oblivious if not downright disdainful of anything beyond the next 6 months.

As of today, the thinking is that the Fed has won the battle and that world economies are poised for a rebound. Funny how all this seems indifferent to the currency debasement war going on among the Central Banks of the West.

Gold is trading firmly below its 200 day moving average having been stopped cold there on Friday afternoon and again earlier in the session today.

Support on the downside lies at last week's low just below $1630. That area has held previously so if it goes for any reason, look for a rather quick move to $1600.

Upside - nothing doing until this market gets back above its 200 day moving average which, for now, is a selling zone for those looking to sell rallies in the metal.

Something must change to get fund flows coming back into the metal to get it moving higher. 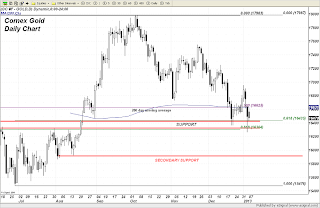 SAme goes for the HUI. The mining shares are obviously out of favor with momentum-based hedge funds. To get any sort of upside momentum going, the former 50% Fibonacci retracemetn level near 457 has to be taken out. That would put the index back ABOVE both the 50 day moving average and the 200 day moving average which are now both trending lower.

The support level in solid red near 420 needs to hold or the HUI is going to sink all the way to 400 and even as possibly low as 390.

Value based buying can hold the support level if large enough in size but it cannot take the index strongly higher. That needs momentum players and they are busy chasing equities in other sectors right now. 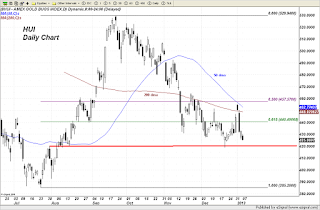