Both Gold and Silver remain in consolidation patterns with tightening ranges as speculative HOT money flows which are exiting are being met by value-based buying and accumulation by stronger hands.

Look at the following open interest chart of gold and tell me which of the two above-mentioned possibilities is occuring? Answer - speculative interest has been drying up in the gold market. 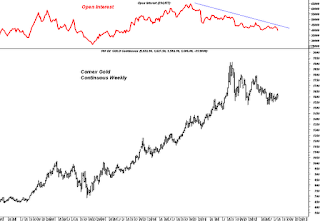 The reason for this is simple - the hot money crowd has no clear conviction as to whether or not the two big Central Banks of the West are going to move forward with a clearly defined bond buying program (aka - Quantitative Easing) of sufficient size to counter the effects of the sovereign debt crisis in Europe and the abysmal rate of growth in the US. That has sent them looking elsewhere for trading opportunities which they have found in the grain markets. While open interest has been shrinking in gold and in silver, it has been soaring across the grains.

Take a look at the following chart of Soybeans and note the vast difference in the open interest and by consequence, the VAST DIFFERENCE in its price chart. 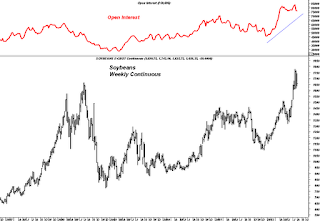 What this once again demonstrates is that the driver of today's markets remains the gigantic hedge funds and the rest of the hot money crowd. Once they train their guns on a market and come in on the long side in size, it will move higher. Whenever they lose interest, it will drift lower and if they exit their longs in large numbers, it will move lower quite sharply unless it is countered by extremely large buying of commercial interests and other deep pocketed spectulative forces.

Keep this in mind whenever you read comments that the current malaise in the gold and silver markets is being orchestrated by the bullion banks so that they can position themselves on the long side of the market for the next wave higher. That is pure nonsense. The gold and silver markets are currently moving lower because the hot money crowd has currently lost interest in them and is putting its money to work in other markets for the time being as they chase profits. Markets in sideways patterns do not make money for hedge funds. They require TRENDING MARKETS to ply their algorithms. Any hedge fund manager that wishes to retain its clients will, by necessity, be forced to look for markets that are trending and once they find them, that is where their monies will be put to work.

I wish that my friends in the gold community who keep attributing every single period of downward price action or sideway activity in the gold market to some nefarious suppression attempt by the bullion banks would realize that they are losing credibility among professionals whenever they assert such things. As a firm believer in the view that the feds have a vested interest in keeping the gold price under wraps, it is distressing to read some of the recent comments that I have seen attempting to explain why gold and silver are currently not trending higher.

I have stated clearly previously and repeatedly, that an objective analysis of price action and open interest that includes the Commitment of Traders reports, reveals that price suppression by the bullion banks occurs during periods of RISING OPEN INTEREST during which the large buy orders of speculative forces are met and attempted to be countered by large blocks of sell orders originating from the bullion banks. The selling, which is vastly different from ordinary scale-up selling programs that we see in every single commodity futures market, is designed to absorb as many of the hedge fund buy orders as possible to slow the upward progress of the gold market.

I have remarked in the past that sellers by nature wish to receive as HIGH A PRICE AS POSSIBLE for their product and thus will not try to OPPOSE a rise in price brough about by determined speculators. They will wisely sell only as much as is needed to offset their risk or lock in profitable prices for the future. AS price continues to rise, they will sell more at these higher levels and are obviously happy to see speculators take prices ever higher. Why would they ever attempt to actually knock the price lower if they are a legitimate hedger? If someone is determined to pay me a lot more money for my product, I'll be damned if I am going to make a serious effort to try to prevent them!

That is not what we see in gold however as bullion bank sell orders oftentimes come with a ferocity that is mind boggling to any trader that can watch the screen. However, this almost inevitably and with only rare exceptions occurs in a rising gold market with rising open interest. Note on that previous gold chart shown above that we did witness an exception with a bout of short covering among some of the big bullion banks on that run to $1900 and a corresponding decrease in total open interest - that was indeed a rarity but one that will at some point be witnessed again in the future.

The exact opposite occurs in a falling gold market - open interest declines as the bullion banks who have instituted the majority of the short positions then use the long liquidation wave to cover those shorts and realize their cash gains in the paper market. Remember as existing longs sell out and existing shorts buy back or cover their positions, open interest shrinks or declines. The result is that the NET LONG position of the speculators shrinks while the NET SHORT position of the bullion banks decreases. Recently we have even seen the relatively rare situation where the SWAP DEALERS, another normally negative force in the gold market, have actually managed to briefly hit a NET LONG position, albeit a small one.

That is what we are currently witnessing in both gold and silver - nothing more and nothing less. When we do get the return of speculative monies into the gold and silver markets once overhead technical resistance levels are taken out, look for the bullion banks and swap dealers to once again resume their selling programs.
Posted by Trader Dan at 9:50 AM 11 comments:

Please click on the following link to listen in to my regular weekly audio interview with Eric King on the KWN Markets and Metals Wrap.