Not much in the way of upside for Silver in today's session but not much to the downside either before dip buyers came in. The action is suggesting more of a pause in a market that is attempting to gather enough force to take out the overhead barrier. You can see that level marked on the chart as RESISTANCE.

Bears will be in trouble if this level gives way and especially if the 50 day moving average gives way.

Downside support lies first at this week's low near the $31 level followed by the 200 day moving average near $30.65

RSI is tracking sideways but remains above the previous peak, a friendly development. 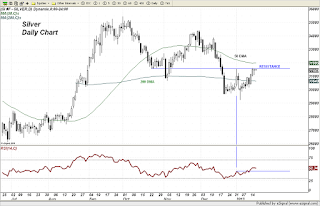 It All Begins in the Public Education System

If you want to know why or how this nation can have raised a generation that is so appalling ignorant of its own system of government, a system of checks and balances designed to prevent any one individual or institution from lording it over the people, please read the following quotation.

"[A]bout a hundred years ago, Professor John Dewey of Columbia University came up with a very different conception of education -- one that has spread through American schools of education, and even influenced education in countries overseas. John Dewey saw the role of the teacher, not as a transmitter of a society's culture to the young, but as an agent of change -- someone strategically placed, with an opportunity to condition students to want a different kind of society. A century later, we are seeing schools across America indoctrinating students to believe in all sorts of politically correct notions. The history that is taught in too many of our schools is a history that emphasizes everything that has gone bad, or can be made to look bad, in America -- and that gives little, if any, attention to the great achievements of this country." --economist Thomas Sowell

Let's take what any citizen/patriot understands - the United States is NOT A DEMOCRACY. It never has been nor should it ever become one. The Founding Fathers despised democracy which they regarded as nothing but RULE BY THE MOB. Being the students of history that they were, they had learned the lessons of the city states of ancient Greece and were thus determined to prevent such a system of government from developing here in the new nation that they were constructing.

As I mentioned in a previous post - one of the fears of the Founders was the TYRANNY OF THE MAJORITY. That is why they gave us a system of checks and balances and a separation of powers within a REPUBLIC, based on a system of FEDERALISM - The fact that this is not widely understood nowadays is a testimony to the ignorance of this generation.

Here is the pertinent clause in the US Constitution:

The United States shall guarantee to every State in this Union a Republican Form of Government, and shall protect each of them against Invasion; and on Application of the Legislature, or of the Executive (when the Legislature cannot be convened) against domestic Violence.

Note well - it does not guarantee the States a DEMOCRATIC Form of Government.

It many cases it is not the fault of the teachers but rather the school boards and the administrators which dictate what can and cannot be taught in the classroom. Based on what we see in today's society, the teachers' unions, school boards and administrators have raised a generation of dupes. If we want to take back our nation from the grip of those on the left who would impose their version of utopia upon the rest of us, then we had better start looking at what we allow our children to be taught and even more importantly, make the time to get involved in their education.

They are our children and the future of our nation; not wards of the state to be indoctrinated against our own values and traditions.
Posted by Trader Dan at 9:50 AM 13 comments: