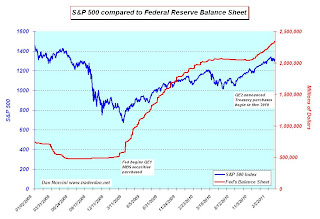 Enter the Fed to the rescue of the markets once again. In September 2010 it was announced that since the economy was still encountering strong headwinds, another tool would be needed to stave off deflationary pressures and provide more liquidity to “gradually increase inflationary pressures” which would be necessary to break any deflationary mindset. Even though the QE2 program was not to be implemented until November 2010, the stock markets went giddy with delight immediately launching into another rally which took the S&P 500 past the old April high and onto new heights near 1300 where it now currently sits.
Again, you will notice that the correlation between the further expansion of the Fed’s Balance Sheet with QE2 and the upward movement of the S&P 500 is nearly exact.
The conclusion we can draw through all of this is very simple – it is the expansion of the Fed’s Balance Sheet through both QE1 and QE2 which has supplied the liquidity driving equity markets higher. Without this liquidity the economic expansion has been far too fragile to continue on its own merits. For any talk about the Fed supposedly withdrawing this liquidity one has to believe that the economic recovery is of sufficient strength to hold its own without it. Just look at what happened to the S&P 500 in April 2010 when QE 1 was drawing to a close and the economic data showed an economy going nowhere without any signs of another QE program on the way -  it plummeted 16% in 3 months time!
But even this is only a half truth. The other side of that coin is that it is one thing to not have any further liquidity injections; it is an altogether different matter to actually begin WITHDRAWING what was in place. In other words, just as the Fed has been attempting to keep interest rates artificially low and make credit cheap and plentiful (hasn’t worked by the way) any attempt to withdraw the liquidity by selling off the Treasuries they hold as a result of the QE purchases will have the opposite effect and push UP RATES beyond the short end of the curve. That will have the effect of tightening credit and slowing its growth precisely at a time in which higher energy costs as crimping both businesses and consumers. In other words, the rising crude oil price is acting as a drag on the entire economy and slowing growth which is EXACTLY THE LAST THING that this economy needs.
Can anyone seriously believe that if crude oil prices remain near current levels and gasoline subsequently stays closer to $4.00 that the Fed is going to actually attempt to shrink the size of its balance sheet by selling off Treasuries which will have the effect of lowering bank reserves and pushing up interest rates?  How does one think this will impact the moribund real estate sector which stubbornly refuses to respond to stimulus? If you think the rate of job hiring is anemic now, just wait and see what happens if interest rates start moving higher on some supposed withdrawal of liquidity.
The other last point I wish to make and is a bit unrelated to this but is relevant - The unstated purpose of the Fed’s QE2 program was to keep interest rates low to LOWER BORROWING COSTS for the federal government. When your national debt is over $14 TRILLION and rising, when annual budget deficits are above the $ ONE TRILLION mark and the rate of economic growth is not generating sufficient tax revenues to give any hope of seriously closing these budget deficits in the immediate future, it becomes a simple exercise in math that the cost of servicing this huge sum of debt is far easier in a low interest rate environment. When you dealing with numbers of this magnitude, a measly 1% raise in rates carries enormous consequences for US borrowing costs and interest rate payments.
I am not so sure that Mr. Bernanke would long hold his current position were he to actually attempt to withdraw any liquidity by shrinking the balance sheet of the Fed. If he were foolish enough to try in the current environment, every politician in the country would take aim at him with both barrels and begin blaming their budgetary woes and any economic woes on rising interest rates. What a convenient scapegoat he would then become.
The situation is that the Fed is stuck. It cannot withdraw any liquidity without creating an entirely new set of problems that would more than likely have to be once again dealt with by adding more liquidity and repeating the cycle. Lather, Rinse, Repeat!
If this were not already enough, the Japanese are now selling US Treasuries to repatriate money back to their country for rebuilding purposes (Japanese insurance companies hold large numbers of US Treasuries which they will need to sell and convert to yen to pay claims – that is the reason for the big rally in the yen on Friday and the weakness in the Treasuries). Toss in the fact that if China were to float the yuan higher upwardly revaluing it as some US politicians are demanding – a move which they think will shrink the US trade deficit with China – and US imports of Chinese goods were to then follow such a move by shrinking, China would need to purchase less US Treasuries to sterilize a shrinking trade surplus with the US. We would then have a situation where the TWO LARGEST BUYERS OF US TREASURIES would be curtailing purchases or outright selling Treasuries at the same time that the Fed might be wanting to begin selling what is going to eventually end up being over $1.5 TRILLION IN Treasury holdings. Just who in the world is going to buy them all? Bill Gross?
Posted by Trader Dan at 1:14 PM 12 comments:

Click on the following link to tune in to my regular weekly radio interview on the Weekly Metals Wrap with Eric King of King World News.

http://www.kingworldnews.com/kingworldnews/Broadcast/Entries/2011/3/12_KWN_Weekly_Metals_Wrap.html
Posted by Trader Dan at 8:57 AM 7 comments: