I thought it might be helpful for us to grasp the enormity of what the Federal Reserve is doing with its Quantitative Easing program by examining the balance sheet of the Federal Reserve system and comparing that to the total Treasury Holdings of Japan and China.
IT is said that “a picture is worth a thousand words”. In this case it might be more apt to say that a picture is word a Trillion words because that is where the total Treasury holdings within the Federal Reserve Sstem have now climbed. The most current date as of this past ednesday puts the Fed holding over $1.125 Trillion in Treasuries.
Compare that to , our largest foreign Treasury holder as of November 2010, which officially holds $895.6 illion of paper. Our next largest holder of Treasuries is the nation of whicomes in at $877.2 illion.
Combined those two nations hold $1.772.8 Trillion in Treasuries.
hen the Fed announced Quantitative Easing in November of last year, they stated that the amount of Treasury purchases anticipated under that program would be $600 billion. e will know better how things stand as we approach the supposed cut off date in June of this year but at the current rate, the Fed will hold nearly as many Treasuries as both and combined.
All of this is money creation that is being used to pumpprime the economy. As the velocity of this money begins to increase throughout the economy, inflationary pressures are going to begin pushing sharply higher. eing short nearly anything is going to be extremely tricky for all but the fleetest of traders.
It is for this reason that I expect the stock market to continue rallying (barring a deterioration in the middle East) until we get some sort of indication that the Fed which started the party, will take away the punch bowl. That of course all depends on the condition of the US labor markets.
One can understand the impact that this is going to have on the US Dollar, not to mention the bond market which is becoming increasingly fearful of the inflation genie.
You might notice on the chart that the Fed has recently begun selling some of the massive amounts of mortgage backed securities that it purchased in order to shore up the banking system when the credit crisis first erupted into the open back in the summer of 2008. Prior to that emergency action, the balance sheet held none of this particular paper.
However, all of the sales of MBS's have been completely replaced by its purchases of Treasuries, which as you can see by looking at the angle of ascent of that line, will easily surpass the peak of MBS's held within the next month. 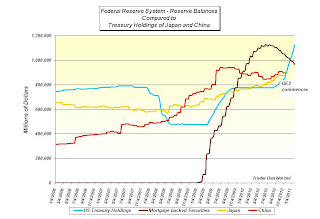