I mentioned in my morning piece today that some of the pressure in the corn market was tied to news that Smithfield, the largest US pork producer, was sourcing corn from Brazil instead of domestically here in the US. That is big news as it indicates how tight current supplies are and how the rise in price is already beginning to do its job of rationing demand.

According to a consultant at Brazil's Safra & Mercado, reported by Dow JOnes which has been all over this story, corn at Brazilian ports is currently fetching $290/ton compared to US corn at the Gulf of Mexico which is closer to $345.  It costs anywhere from $30 - $40 ton to ship the grain to the US.

There is no doubt that the meteoric rise in the grains this summer on account of the severe drought is going to impact all of us at the grocery store in the near future. My concern in all this is what might happen should the Fed foolishly choose to go forward with another round of QE. Keep in mind that the rise in the grains has been fundamentally driven. In other words, there are legitimate supply/demand fears pushing the price higher.

If the Fed does indeed begin another round of bond buying in order to prop up the US equity markets, a huge amount of hedge fund speculative money is going to flow directly into the commodity sector in a very crude fashion. Think of it as a shotgun instead of a sniper's rifle. They will blast everything in sight higher.

In the grains this will have the immediate effect of pushing prices even higher further exacerbating the impact of the drought. The problem will occur because the money flows can be so huge that even deep-pocketed commercial sellers will have difficulty standing in front of such a torrent of buying. I shudder to think what might happen if their computers drive the price of corn to $9.00!

Remember those food riots that began a while back in Algeria and the spread across parts of Northern Africa and the Middle East? Some, including myself, believe that those riots were the catalyst for what have now become rather euphemistically known as the Arab Spring. When food prices begin soaring, they impact the poor first and when a large enough segment of society becomes restless, it is always a safe bet that further instability soon follows. While Bernanke tried deflecting the entire blame for the surge in wheat prices back then on the weather, the truth, as we pointed out at the time, was that the entire commodity sector, including wheat and the rest of the grains, began moving higher at the exact same time as QE I commenced. QE2 just made matters even worse.

These monetary masters and their utterly useless strategy of buying bonds are playing with fire.

Posted by Trader Dan at 5:01 PM No comments:

Both Gold and Silver are under selling pressure today as the sell off in the grains seems to have pushed a large amount of hot money out of the commodity sector. Soybeans are currently locked at limit down as is the front month corn contract. Talk that Smithfield is importing corn from Brazil has sent supply side bulls scurrying for cover and demand side bears are pressing their case. The pool in the July was 112K at one time and is now down to 26K currently. In the November Beans, the pool is at 37K as I write this.

Traders had been bidding up commodities in general of late as evidenced by the recent climb in the CCI (Continuous Commodity Index) but apparently the onset of some rain in the Corn Belt combined with continued Dollar strength and nervousness surrounding Spain and other European nations, is too much for some of the new longs to handle. They are heading to the exits today in both commodities and in equities.

One of the results of this has been to push the yield on the Ten Year Note down to an amazing 1.411 as I write this. Clearly interest rates continue to plummet globally as traders rush for anything that they feel can provide some sort of shelter. It is an astonishing thing to see yields in Denmark actually go negative!

The Dollar has also pushed into a new 52 week high today and is currently trading over the key 84 level on the USDX. It looks poised to head higher at this point. that is going to give us some extra headwinds for the precious metals do deal with, particularly silver.

For the last two weeks, every time silver has pushed below the $27 level, it has always popped back above that level before the session has closed. That has indicated the presence of strong buying. If these buyers do not surface before the end of today's trading session, silver will very likely head lower and retest the key $26 level. It must hold that level to prevent another round of long liquidation and fresh short selling by hedge funds playing the "slowing global economy" theme. Weakness in the mining shares is not aiding the cause of the bulls right now. 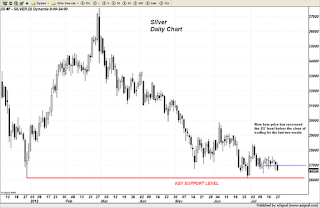 Gold coin sales are apparently slowing compared to the same period last year as reported by Dow Jones this morning.

Here is the short blurb:

The US Mint's sales of gold coins have been "unusually low" in
July, even when adjusted for the seasonal summer lull in gold coin demand, says
HSBC. With 17,500 troy ounces of gold sold as of July 23, the Mint is far
behind the 65,500 troy ounces it sold in the same month of 2011.

Again, with inflation fears being trumped by slowing growth fears, gold is catching fresh short selling as well as long liquidation. However, it is once again down into the region that has seen strong buying based out of Asia emerge. From here down towards $1525, strong hands have been accumulating. We will watch to see if they are still making their presence felt. 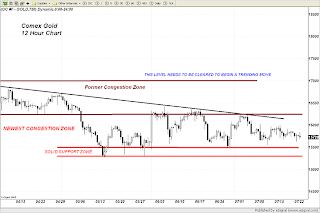 The Complacency Index or the VIX as others properly call it, is finally waking up. Maybe, just maybe, we are finally seeing some of these numbed, see no evil traders begin to get nervous. Hard to see what more they could need to rattle their cages but they apparently have a great deal more confidence in Central Bankers and monetary officials than I do. 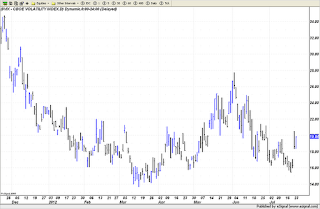 The HUI chart has turned ugly once again and is now threatening to close in on the May low near the 370 level. Pressure on the mining shares has been very strong. Some of this is manipulative in nature; some of it is related to the ratio spread trade with hedge funds buying the bullion and shorting selective shares and profiting from the spread between the two. Notice how effective the Fibonacci retracement levels have been when analyzing the price action of this index. 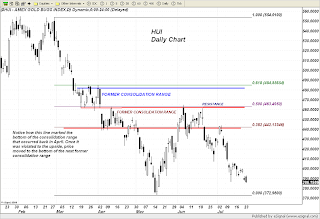 The S&P 500 is flirting with its 50 day moving average, a key technical level on the price charts. Notice how it bounced off of this level earlier this month and proceeded to maka a run back towards what might be a double top forming near 1375. Support is layered under this market as noted on the chart. A breach of 1300 could get things mighty ugly very quickly. We will see if the usual suspects arrive just in time to once again "miraculously" revive the index and prevent it from inflicting technical damage on the charts as they have done so often this year. 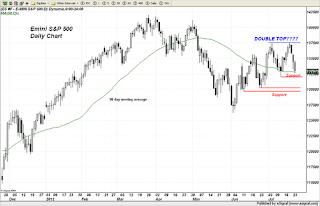