The long term monthly chart provides an excellent perspective of the hard asset sector. Note how back in 2008 when the credit crisis first erupted and a deflationary mindset took over, that the sector crashed to earth in a brutal fashion. It took two doses of QE to jam it north, the first ending before the second round was announced. Of course, the second round of QE provided the fuel to send the index soaring to a new record high.

Once again deflationary expectations took over due to the European Sovereign debt crisis, a slowing Chinese economy and of course, a US economy in the toilet. Down goes the commodity index once again in a big way.

All that did was to pave the way for yet another round of stimulus, one from the ECB, another from the Chinese authorities who are doing a government works project and now today's QE 3, courtesy of the scam artists at the Fed.

Any guess where this index is now going to go? If the chart is accurate, it should make a push towards 600 where it fill face a big test. If it plows through the 600 level, heaven help us all because the odds will then increase of it pushing back towards 650 and higher. 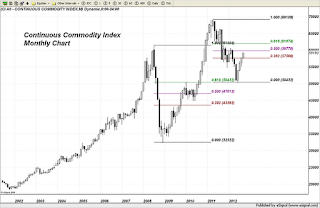 The HUI is closing in on a KEY technical resistance level on its weekly chart at the 50% Fibonacci Retracement level of its last year summer high and this years trough. That level is basically right at the high made in today's session as it comes in beginning at the 504 level. If the HUI closes the week through this level on a good strong note, look for the index to move towards the 540 level. Note that all of the major moving averages, whether the shorter term 10 and 20 week or the 50 week moving average are either turning higher or flattening out and beginning to turn. 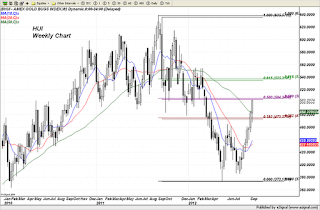 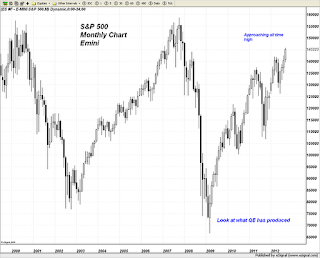 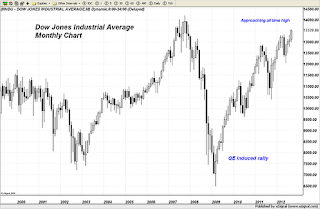 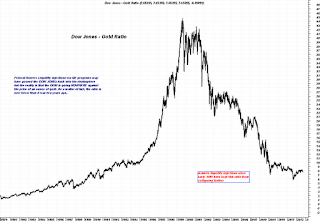 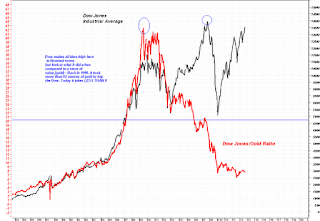 Which One would You Want to Own???

Now that the Fed has made it abundantly clear that they intend to further debauch the US Dollar so as to keep Wall Street happy, watch for gold to once again begin outperforming against US Treasuries. Notice that each previous round of QE, has sent the yellow metal higher against the price of the long bond as the latter appropriately responds to an increase in inflation expectations by such activity.

Compared to previous QE's, this round is relatively modest by comparison as a $40 billion per month price tag still is less than $500 billion annually. Still, there is Operation Twist occuring alongside of this. Either way, I would expect the pattern to resume in favor of gold now that the deed is history. 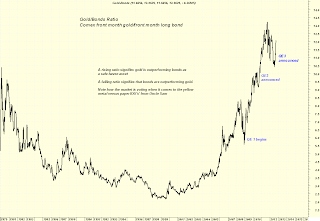 Posted by Trader Dan at 4:45 PM No comments:

The Fed and the ECB determine to Destroy the Middle Class

While Wall Street cheers the actions by the Fed to further enlarge its already bloated Balance Sheet, those of us who live on Main Street should get accustomed to further increases in our food and energy costs. What I find rather perverse, is the statement by the FOMC that "longer term inflation expectations remain stable". Yeah, maybe on the salaries and wages front but sure as hell not on the raw materials front.

Take a look at where hedge fund money is now flowing - right back into the hard or tangible assets category again. Get used to higher gasoline and heating oil prices and brace yourself for the food sticker shock you are going to experience in the weeks and months ahead. 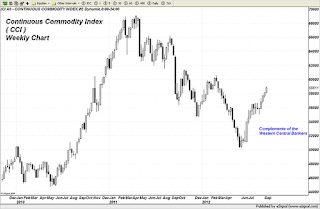 I do not know whether to laugh at such utter stupidity or to weep for my nation's future. After the Fed has already conjured into existence the piddly sum of $2.5 Trillion for QE 1 and QE2, we now get another $40 billion/month of agency debt purchases for as far as the eye can see. A lot of good the first $2.5 Trillion did. this latest one will do the same - nothing as far as curing what the real problem is in the US economy.

This is supposed to keep long term interests rate low to encourage home mortgage borrowing. Right, I am sure all those folks who were holding their breath waiting for the yield on the Ten Year to drop further from the 1.4% level it was trading at six weeks ago before taking out that mortgage. Guess what, thanks to all this money creation from the both the Fed and the ECB, the bond market is now shifting away from the deflationary scenario towards one of inflation, regardless of the Bullsh*t in the FOMC about inflation expectations remaining subdued. The yield on the Ten Year is now 1.8% AFTER all this FOMC nonsense. NIce work guys! Maybe you can do yet another round and drive the Ten year over 2% for us. 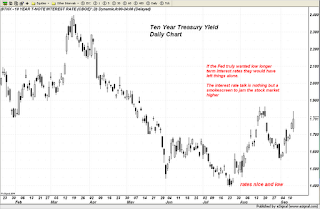 It also looks as if the long bond might be breaking down the technical charts also. That tells us that LONG TERM INFLATION EXPECTATIONS ARE INCREASING. the exact opposite of what these serial liars told us this morning.

Make no mistake about it, the bond markets and the commodity markets are signaling inflation. Pay no attentiont to the worthless claptrap being spouted by these monetary buffoons. The real picture is in the price charts which are always forward looking.


by the way, the rally in the stock market, which is now sitting at higher levels than when the current inept-in-chief took over, is a perfect picture of what happens when inflation hits the paper asset category. 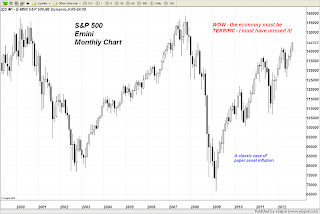 By the way, in case anyone did not notice, I am particularly incensed to see this QE nonsense. I am disgusted at what the long term impact is going to be on my children and their future. so, today, you all who are reading this, get to read a written rant instead of an audible one!