The big hedge funds are also exiting from the Silver market as they have been doing in gold but not near to the same extent. The reason is because of silver's industrial use. As a monetary metal it is experiencing selling tied to money flows leaving other sectors and flowing into equites; however, those same money flows, with many looking at the so-called "improving growth" scenario, are finding some of their way into the metal on the way down. 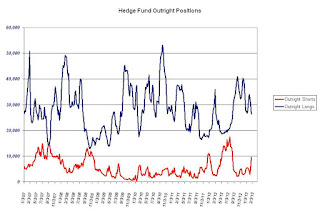 We do need to keep a close eye on the copper market however for if hedgies begin to get bearish on copper, it will be a tough order to keep them bullish on Silver. As of this Friday's COT report, hedge funds remain net long in Copper although they have trimmed that exposure by nearly 12,000 contracts through the reporting period.

Silver bulls do not want to see downside support near $26.25 - $26.00 give way for ANY REASON. It has been a solid base for more than a year and a half and has always attracted very substantial buying near those levels. Value based buyers see the metal as cheap down there. If, and we do not know at this point, if the metal were to test this level and rebound, it would indicate their activity and should bottom the metal. Still, from a momentum based view, it needs to clear $30 to get any excitement going on the part of the bulls.

One last thing - since I caught a lot of flack over my article on Backwardation by some of the uninformed out there who are always ready to swallow the latest nonsense, so long as it confirms their perma-bullish views, I wish to merely state that I hope you have learned something by the experience.

Markets will bottom when they are ready to bottom and not because someone "insists" that they must bottom in order to generate more traffic at a web site and thus reap more money from the Google Ads people. There are way too many in the gold community who seem to have some sort of perverse narcissistic addiction to constantly calling for bottoms (and tops I might also add) no matter what the price action is indicating. It is one thing to have a long term bullish view of gold; it is quite another to dredge up one story after another predicting with each one that a bottom is now imminent in the gold market.

There is a time when markets go up and a time when they go down. It is really that simple. When the perceptions of market players change (and who among us knows precisely when that will occur?) then the price action will change.

Right now the perception among the majority is that gold's run is over. I am not saying that it is; I am merely telling you what the perception is. This is why gold is seeing so much heavy selling. This is what moves markets. When the conditions change so will the perception. Then those who were rushing to sell gold will be rushing to cover shorts and buy it all back or go long.

The key is in reading the price action on the chart for that is all technical analysis really is; a way to measure changes in perception towards markets.

To summarize - hedge funds are growing very bearish towards gold. They are doing so however now that gold has reached levels commensurate with former levels at which Asian Central Banks were very active as buyers. If the physical market buyers surface in size near current levels, there is fuel for an active short covering rally to squeeze some of them out. However, as long as the equity markets remain the place to be for hedge funds with money to invest, gold is going to struggle to find enough of these momentum based buyers to drive it sharply upwards. For that to occur, we need something in the status quo to change in order to shift perceptions back in favor of gold buying by speculators. 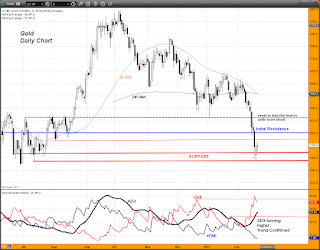 Perhaps Ben Bernanke's testimony in front of Congress next Tuesday and Wednesday will prove to be the Midas touch for gold. We will have to wait and see what he says then. My guess is that he is not going to upset the apple cart as he knows full well what is going to happen to the US equity markets if he even hints at ending this program of QE sooner than the end of this year.

Again, I am not saying that gold cannot rally; it is certainly oversold and due for a bounce; however, rallies are going to be sold until we get some sort of technical chart confirmation that indicates a change in the near term trend has occured. Currently that trend is lower.

Incidentally, in the late afternoon here on Friday, news hit the wire that Moody's had stripped the UK of its AAA rating. That was enough to send the British Pound sharply lower in very thin trade but it also saw gold goosed up into positive territory. We will want to see how the market reacts Sunday evening and early MOnday morning after a weekend to digest the news. Gold priced in terms of British Pounds moved up rather strongly on the news.

here is the British Pound priced gold chart with some notes. 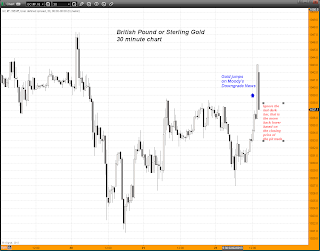 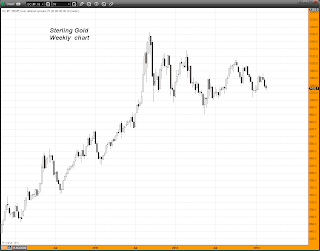