Quite a battle royale is being waged at the current time in the gold market. The bullion banks are digging in at and above the $1600 level while buyers are digging in just above the $1580 level where a new support level is emerging. The victory will be to whichever side refuses to blink. Open interest readings are at relatively high levels so the stakes are serious.

Yesterday we had a bearish outside reversal pattern form on the short term charts that I employ; today we had a bullish thrusting pattern on that same chart. Bulls regained the broken short term support level near $1595 that had failed yesterday but did not manage to recapture the $1600 level for any significant length of time. They will need to clear and HOLD that level to set up a challenge of the bullion bank capping level at $1610.

The new support level formed just above the $1580. This level now takes on a new significance and will need to hold on any subsequent retreat in price to prevent any further long liquidation on the part of the shorter term oriented traders. 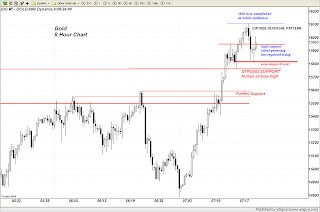 For the time being, the bears still retain a slight advantage because of the inability of the bulls to hold $1600. Based on what I can see of the open interest readings, a fairly large contingent of brand new short sellers has formed. Some of them will be squeezed out if $1610 gives way as they are counting on that bearish outside reversal pattern to hold.
There are still plenty of cross currents at work in these markets which has kept just enough uncertainty in the minds of traders to keep most on pins and needles and ready to react very quickly to sudden changes in price. I might add what I said yesterday, the modus operandi is to react first and think later. We saw some of that in the long bond today. Yesterday I marvelled at the apparent "counterintuitive" 1 1/2 point rally based merely on a statement from the President that some progress was being made in the US debt limit negotiations. Traders today did have time to think about this overnight and took back a full point from the best levels of yesterday. Bonds are back to a holding pattern now as traders gauge the next direction for interest rates but most seem to agree with my assessment from yesterday that the sharp move higher was unwarranted.
There are a couple of things worth mentioning on the currency front today. The first is that the US Dollar has ONCE AGAIN fallen back below its 50 day moving average after failing to advance much past the 76 level on the USDX chart. That makes a total of SIX reversals across this significant moving average since May. Clearly, the trend following trading systems are getting whipsawed to death in there. If the Dollar cannot bounce from 75, then it will once again head back down towards 74.50 to retest that level where we will watch to see whether or not it can reverse to the upside. 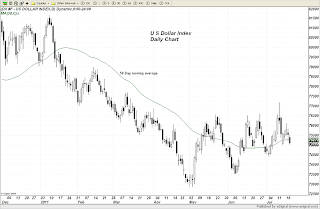 The other currency worth mentioning is the Japanese Yen. During this period of risk aversion trades and moves towards safe havens, the Yen has been the recipient of rather strong inflows. These inflows have pushed it to levels where the BOJ began voicing concerns about "excessive currency movements not warranted by fundamentals" some months back. We need to watch the yen closely to see if we are going to get another round of Japanese monetary officials appearing at microphones.
There seems to be a type of linkage occuring between gold and the yen recently in much the same fashion that the link between gold and the euro was the norm a few years ago. You remember that link - the euro would move sharply higher and gold would follow it up. It was the anti-Dollar trade. Back then we were watching the Euro-Yen cross as it was the barometer of risk. When it moved up, gold and most other commodities moved up as well. When it moved lower, so too did gold, generally speaking. What we were then monitoring was the Yen carry trade.
Now we are apparently witnessing a move where traders/investors are spurning European debt in general and are having reservations about the Dollar as can be ascertained from its inability to mount a sustained upside breakout of its range trade. They are viewing the Yen as a type of safe haven, no matter the fact that Japan as a percentage of GDP, has amassed a total government debt level near 200%. That makes the US look downright frugal by comparison. Either way, for now the Yen and the Swiss Franc are the safe haven currencies. What this means to us as traders is that on days during which the Yen and Swiss Franc are higher, we should expect to see either higher gold prices or at least, some decent buying on any downdrafts in price. This correlation is not 100% but it is at least close enough that it merits mentioning. Keep in mind that in these volatile markets, this linkage can break down but for now, it is definitely there. 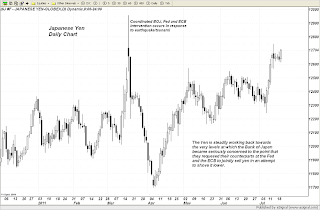 Silver has made a very sharp recovery off of its worst levels of the session and done that in very impressive fashion. It found support just above the $38 level, which is where it should have if it was going to bounce. The fact that it has now climbed back to the $40 level is quite noteworthy as it indicates that the new short sellers that had climbed aboard the bear wagon got way-laid. If the bulls can keep the price ABOVE $40 for the next few hours, they have a very good shot at taking it back up towards $41, where a breach of that level will send this market to $42 very quickly. Right now as I write this, I can see the sellers attempting to hold the line at that $40 level.
I wish to repeat something here that I have said on my radio interviews at King World News and my written comments - the fact that both of these metals are acting so strongly during the period which we seasoned traders refer to as "the summer doldrums" is a testament to the elevated level of fear, uncertainty, confusion and distrust of the monetary authorities in the minds of traders globally. These seasonal patterns have evolved over many years of trading as there is a reason for these cycles. As such, any trader who ignores them or dismisses them as unimportant is expressing profound ignorance and a type of rash recklessness which marks so many neophytes to this business. They tend to be Johnnie One Notes, who are either wildly bullish all the time or wildly bearish and who have not learned yet to read the rhythm of the markets. Sadly we live in an age where any individual with a keyboard and a penchant for striking keys with their fingers is at once considered some sort of divine oracle on the markets.
Professional traders note whenever seasonal patterns are not holding because it is a clue that something is afoot. We seem to be witnessing this right now  based on what I am currently seeing in the price action of the metals. If this is indeed the case, both the gold and silver markets are telegraphing that the normal seasonal pattern of 4th quarter strength, may very well be quite dramatic this year. Stay tuned on this one folks! 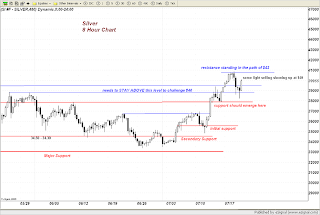