I particularly enjoyed this headline that originated out the hearings featuring Fed Chairman en ernanke – being questioned about the overall policy of QE, the Chairman stated:
“all bond buys MAY (emphasis mine) have created up to 3 million jobs”.
Yes indeed they MAY have done just that – then again, they MAY NOT have done anything of the sort. I think I could also assert with the same sort of complete confidence, preparing a nice brisket on my backyard smoker MAY have also contributed to the creation of multiple jobs in the beef industry. My question to the Chairman would be:
“Can you assert witomplete confidence that the enormous amounts of money expended under QE1 and now currently underway with QE2 did specifically create that number of jobs that you just asserted?”
If he answered in the affirmative, then we could produce the actual numbers.
Let’s see – under QE1 where the Fed was mopping up the alphabet soup derivatives and then Treasuries, the sum involved was in the general vicinity of $1.5 TRILLION  ($1.25 in MS and $300 billion in Treasuries). Let’s do the math – that means each of those 3 million jobs took only $500,000 to create. ow – is that a deal or what?
Perhaps we are being a bit too hard on the Chairman – let’s use the numbers associated with QE2 instead, $600 billion. If we can create another 3 million jobs each of those jobs will have cost a mere $200,000 to create. Leave it to the feds to come up with numbers like that and have the temerity to congratulate themselves.
For those of you who want to argue that these jobs will result in their holders paying taxes back to the government thus lowering the overall cost, I will grant you that but you are still left with the unfortunate fact that the amount in taxes paid will certainly not cover the overall costs incurred in creating the job thus still leaving the citizenry in a hole.
Perhaps the citizens would have gotten a better deal on their children and grandchildren’s money, if the Fed had just written a check to every single family in the nation for $34,711. They would have spent the same amount under both QE’s and I suspect we would have had a lot more consumer spending than we have gotten by purchasing rotten derivatives from the hairbrained banks who manufactured them and more government IOU’s.
This is the particular line that had me falling on the floor and pulling my hair out:
“e have been very careful not to distort the bond market”
Technically, true but the answer would be more accurate if he stated:
“we’ve been very careful not to distort the bond market but our primary dealers and same sharp hedge fund managers have had no such scruples. They were just front running our purchases for the last two months making obscene profits in the process. However, since last week, things are not going so well for us. Suddenly our game plan is in the toilet.”
Here is yet another one:
“The Dollar has been looking more attractive versus other currencies”
Factfinder:  US DOLLAR CHART 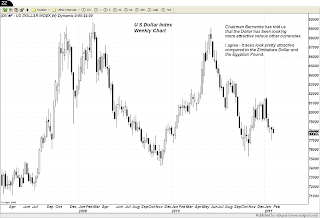 And then lastly:
“Fed policy does not add one more bushel of wheat to the world supply” (I am paraphrasing that one but it contains the basic premise that it is not the Fed’s fault that commodity prices are rising.
That is once again technically true but to deny that Fed policy has resulted in an enormous surge in SPECULATIVE DEMAND for hard assets is yet again, playing fast and loose with the facts. Take a chart of the CCI and overlay the implementation of both QE’s and one can easily see the connection between the two. I will grant the Chairman that there has been a strong weather element in the rising cost of food. That coupled with increasing demand from developing and emerged markets has indeed been a strong factor in the rise in price of the grains and other commodities in general, yet for the Fed Chairman to seemingly lay the entire blame for the rise in commodity prices on factors outside of his control is striking for its audacity. Note to en: SPECULATIVE DEMAND is real and cannot be overlooked when attempting to ascertain factors behind price rises and it is a FACT that demand from this quarter has been fanned by QE as investors have looked to tangible assets to shield their wealth from the accompanying currency debauchment that inevitably results from unlimited money printing.
Posted by Trader Dan at 9:34 AM